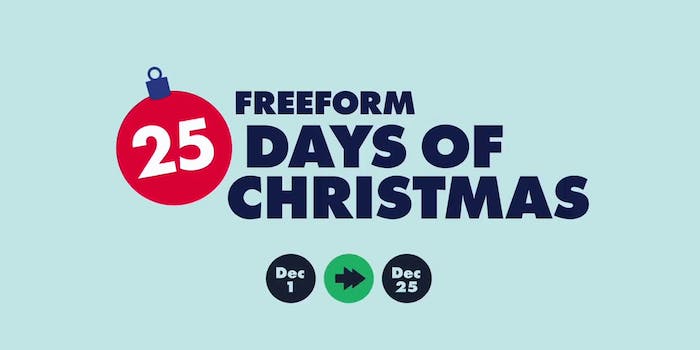 How to watch 25 Days of Christmas online

It's the most wonderful TV time of the year.

It’s that time of year again, folks. It’s colder, likely because Jack Frost is nipping at your nose. Storefronts are lousy with sales, and the roads are crammed with eager shoppers. And then there’s family, breathing down your neck with plans. In the midst of all this hullabaloo, even the best of us forget the true meaning of the season. That meaning, of course, is nesting on your couch with some sugar cookies and eggnog cramming your head with classic Holiday movies and shows with the 25 Days of Christmas.

If you’re unfamiliar, every year, from December 1 all the way through Christmas, the Freeform channel rings in the most wonderful time of the year by broadcasting all those holiday movies that give you the warm and fuzzies, including The Santa Clause, The Muppet Christmas Carol, Home Alone, and every production that Rankin and Bass ever made. This year, there are even special Simpsons holiday episode marathons tossed into the mix. Woo hoo!

Here’s everything you need to know to watch 25 Days of Christmas online.

When does 25 Days of Christmas air?

What channel is 25 Days of Christmas on?

How to watch 25 Days of Christmas

Freeform is available on a handful of the major live TV streaming services. When trying to decide which one is best for you, you’ll want to weigh the cost, the other channels you’ll receive, and the compatible devices for streaming.

For a more à la carte service, look to Sling TV. It offers two cable packages, Sling Orange and Sling Blue, both of which cost $25 per month. If you grab them both (Sling Orange + Blue) you can save $10 per month. Sling Blue offers more bang for your buck with over 40 channels, including sports necessities like FS1, NBCSN, and NFL Network. You’ll also gain access to the usual cable mainstays like Food Network, Discovery, Cartoon Network, SYFY, and FXX. Here’s the complete guide to Sling TV channels. To gain access to Freeform, you’ll need to nab one of the Sling Orange packages.

25 Days of Christmas live stream: Other ways to watch

Many cable channels let you live stream directly from their site, and Freeform is no different. Simply go to the channel’s website, select a video to watch, and then fill in your login information from the above services when prompted.

If you want to stream on the move, we suggest downloading the Freeform app. The same login from the website will work here to watch new episodes of Lifetime shows and movies.