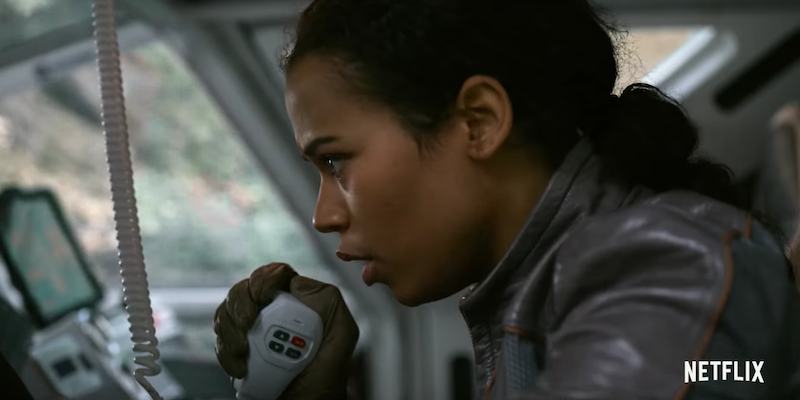 Netflix reboot ‘Lost in Space’ is a missed opportunity

The shiny series should have been a can't-miss hit. What went wrong?

Other than a 1998 movie version, kitschy ‘60s TV property Lost in Space has been sitting on the shelf, waiting to get the gritty reboot treatment. Originally a spin on The Swiss Family Robinson, the classic premise of a family in the future that gets stranded on an alien planet along with a robot, military officer, and sneaky doctor works in 2018—but there are plenty of other influences Netflix’s updated Lost in Space has pulled from.

This is a big, expansive concept, chock full of nostalgia, in a genre people love, done in mass appeal, “four quadrants” fashion, on a platform that throws money at content like it’s going out of style. There’s even some gender-bending casting. It’s easy to make fun of remakes and revivals when seemingly every show is coming back on the air, but bringing back Lost in Space is a great idea.

That doesn’t change the fact that the new Netflix version is underwhelming, and a mess. Aspects of the show work great, and a sketch of what might have been eventually emerges. If the effects budget was as expensive as it appears, then Netflix is banking on Lost in Space to be a marquee show.

Consider the robot in this version, which has a sleek, spindly frame, capable of twisting and contorting like a transformer. Although the animated version of the character is eventually replaced by a convincing costume for most of the season, there’s still a glowing, pulsating display that can change color in place of its face, reminding you that this is the future, and we’re going to use as much CGI as possible. (The changes they make to the robot’s backstory work about half as well.)

Toby Stephens as patriarch John Robinson is wooden, and Ignacio Serricchio’s Major Don West is boring, but the rest of the ensemble is strong. Maxwell Jenkins, Taylor Russell, and Mina Sundwall all do fine work as the Robinson kids, all of whom get a few chances to shine throughout the season. The heart of the show is the unsinkable Molly Parker, who after years of stealing scenes as a supporting player on series like Deadwood and House of Cards, is finally given the chance at a leading role here.

The standout, however, has to be the always enthralling Parker Posey, who, in a move of sheer brilliance, is cast as the devious Dr. Smith. As played originally by Jonathan Harris in the ‘65 TV show, Dr. Zachary Smith is the epitome of a finger-tenting villain. Gary Oldman brought a little more menace to the character in the movie adaptation, but Posey is the first actor to play Smith with real dimension as the antagonist. She’s sympathetic, but that doesn’t make her any take any less crafty or deceitful.

Lost in Space gets off to an exciting start, but it’s not long before the show begins to struggle with its ambitious aims. Much as the writers try to tease out information in a smart, economical manner, just enough at a time to keep you interested, the pieces are never compelling enough to make one care about the larger puzzle. There’s a formula going on with each episode setting up new challenges for the Robinsons and company to face, as we’re told in flashbacks about the state of Earth, what their lives were like before they left for space, and about the secrets they carry with them. Conceptually, it works, mixing the serialized story with the episodic nature of the original. But each of the 10 episodes in the first season run long, and since the story is only intermittently captivating, Lost in Space soon becomes a slog.

It isn’t quite a kids’ show, but it does an admirable job of balancing kid-friendly material with slightly more mature content. Between A Series of Unfortunate Events and Stranger Things, Lost in Space is right in the middle on the family-friendly scale. The show is in the right place tonally, but a lot of the dialog is, well, corny. (“Ask the chicken if I’m a good guy come dinnertime.”) It’s not quite as cheesy as the original series, but the new Lost in Space does have an unfortunate number of groaners.

Worst of all is the score. It’s going for soaring and majestic but ends up plain excessive. Every time the music swells, overwrought and overbearing, it belies how interesting the show actually is. In some ways, the score may be a metaphor for the whole thing. Lost in Space is trying so hard to make you believe it’s something special, but at times the show itself doesn’t seem to believe that.

This is also evident in the references the new series makes to the ‘65 version. When the robot finally utters the iconic, “Danger, Will Robinson,” toward the end of the first episode, it’s clear this is a big moment, probably even to those who aren’t familiar with the original (the line is also the title of the season finale.) Then there’s the reveal of Dr. Smith’s character, which is also inserted awkwardly into the end of the pilot. These mods might work if everything around them was a little better, but they wink too hard at the audience.

Lost in Space is not a complete waste of time, but it is a huge missed opportunity. It could’ve easily been a weird, fun, all-ages sci-fi show. The premise is timeless enough to build a fascinating universe around. In a best-case scenario, Netflix could’ve ended up with kid-friendly Westworld. Instead, a sugary piece of bubblegum that gets old quickly.