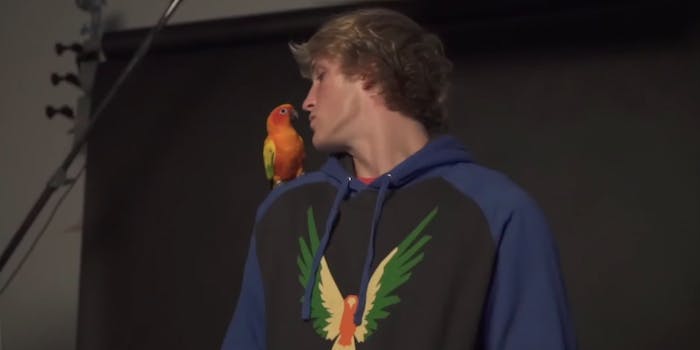 His pet parrot was eaten mere months after his dog was eaten by a coyote.

Logan Paul is grieving for his second pet eaten this year–his parrot, Maverick–mere months after a coyote broke into his yard and ate his dog Kong.

In a vlog posted on Monday, the YouTube star wondered aloud whether “death is trying to teach me a lesson” and referenced last year’s infamous suicide forest scandal where he filmed a dead body while visiting Japan.

While the former Vine star was visiting Sweden, Paul’s housemate told him the news over FaceTime while another person filmed his response. His new dog, a massive Tibetan Mastiff named Ginger, ate the parrot and apparently left a horrifying scene behind. After Kong’s death, Paul had specifically chosen such a large breed so coyotes wouldn’t be a threat. “She’s supposed to kill coyotes, not my pets!” he can is heard shouting in the video.

“Why do all my animals get murdered when I’m gone?” Paul asks in the video, which currently has over four million views. Paul reportedly owned Maverick for seven years–since before he found internet fame–and the parrot inspired both the name and design of his clothing line. Paul posted a picture of Maverick and news about the loss on Instagram Monday, along with the caption, “This little bird inspired so much of what I do, he was my best friend…”

i hate this post so much and i hate that i have to do this but i believe i owe it to y’all after the years of continuous and relentless support… the iconic @MaverickParrot has died. After being with me every day for 7 years, since before I even started Vine, Maverick passed while I was away in Sweden. And by passed, I mean, he was eaten by my Mastiff, who mistook him for a small rubber chicken. This little bird inspired so much of what I do, he was my best friend, he’s the inspiration behind the @MaverickByLoganPaul icon worn proudly by millions of people around the world, and as bizarre as it sounds, this little parrot’s legacy will live on FAR beyond his life. I’m not sure where to go from here or how to handle this because it’s symbolic to me in so many ways, but for all the Mavericks out there who continue to see life through the lens of possibility, who continue to persevere and embrace their differences, I have never-ending love and optimism for you. Maverick will always be with us in spirit, and he will forever hold the largest piece of my heart. Stay strong & I will too

In his vlog, he claims to have matured since the suicide forest incident, but critics remain skeptical. In April, Paul announced Kong’s violent death on Instagram, receiving an outpouring of condolences from both his fans and his biggest online rival, KSI. That goodwill was cut short soon after, though, when Paul tweeted about possibly making a coyote diss track and began selling pillows of his dead dog, prompting accusations that he was attempting to monetize the somber situation.

Given that Paul’s friend filmed his reaction to hearing about Maverick’s death and that video has both millions of views and plenty of ads, one can’t help but wonder if the YouTube star isn’t taking a similar route with the loss of this pet. I guess we’ll have to wait and see if any Maverick-themed products pop up in Paul’s store in the coming weeks.