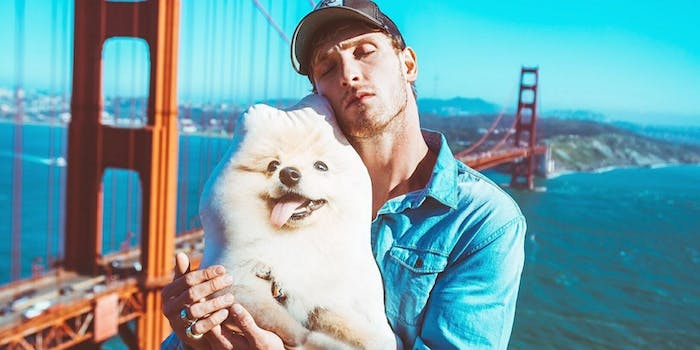 He said it's going to a good cause.

Logan Paul has been heavily criticized for trying to monetize the death of his dog. Now, he’s selling a pillow of his beloved pet for $35. But this time, he’s trying to stem off the criticism by saying that all proceeds will go to a local animal shelter.

Paul showed the pillow on Instagram on Monday and said all the money that’s made would to go to the West Valley Animal Shelter “to help raise money & awareness about coyotes and keep the people & pets of Los Angeles safe.”

young doggie may no longer be on this planet, but we’ve preserved his legacy in this exclusive, world class @KongDaSavage pillow, now available. ALL proceeds go to the West Valley Animal Shelter (@friendsofwestvalley) to help raise money & awareness about coyotes and keep the people & pets of Los Angeles safe. they took my son… but at least i have this pillow, it’s good at absorbing tears. link in bio

Paul’s dog, a Pomeranian named Kong, was killed by coyotes last month, and even Paul’s most bitter online rivals paid their respects on social media. But emotions turned on Paul when some accused him of trying to make money off Kong’s violent end—there were ads on his initial video about how Kong died and he publicly contemplated making a diss track on coyotes (that also most likely would be filled with ads).

As one Twitter user wrote, “Milking this whole situation… funny how people thought you changed.”

But it sounds like Paul is trying to raise awareness on the danger of coyotes to your household pets. In the website description of the pillow, it reads “We are going to build a Kong Da Savage Coyote Awareness Program for Encino and L.A. residents, and it all starts with the wonderful people in West Valley and L.A. Animal Services.”

Though this appears to be a nice gesture, Paul is still feeling heat for allowing far-right radio host Alex Jones on his podcast earlier this month and for his recent flat earth documentary.

Oh, and others haven’t forgotten about the dead body he filmed for his vlog at the beginning of 2018.