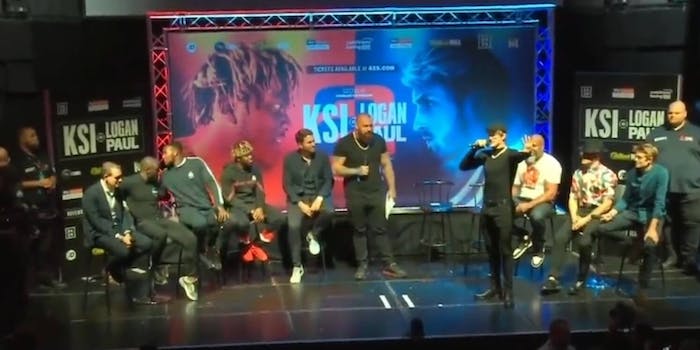 'He’s using abortion as a means of contraception.'

During a press conference last week to promote their upcoming YouTube boxing match, Logan Paul faced the internet’s ire for saying KSI had paid for five abortions and then ripping him for it. Now, Paul is slightly walking back his comments and trying to explain why he’s actually pro-choice.

“I might kill this man,” Paul said during a London press conference earlier this month. “You may not know it but [KSI is] on his fifth abortion. His fifth. That’s five babies dead. And I think I might return the favor. And I might kill you. I might end you, man. I’m going to light you on fire, bro.”

KSI didn’t respond to that taunt during the press conference—KSI’s brother, Deji, has also blasted KSI for apparently terminating multiple pregnancies and actually spoke about it on Paul’s podcast—but the internet certainly came after Paul for his cavalier way of, as one Twitter user wrote, using “women’s *possibly traumatic* experiences as pawns to further ur shitty beef for clout.”

Soon after, a viral #loganpaulisoverparty hashtag was created on Twitter.

This weekend, Paul said his comments were “distasteful and way insensitive” and that “it left a bad taste in my mouth.”

In a video posted to his YouTube channel, Paul appeared to reconsider whether that was an insult he should have lobbed.

“I was very harsh in what appeared to be my condemnation of JJ’s choice to have five abortions,” Paul said. “I said something distasteful and way insensitive. I think I said something like ‘I’m going to kill you bro and end you the way you did to the babies.’ In fact, it left a bad taste in my mouth after I said it.

“My rebuttal for that would be that in the context of a fight where you have two guys who are literally trying to kill each other in a ring and get into each other’s heads, this fell under the category of ‘fight talk,’ which historically can get pretty toxic and fucked up. This definitely comes into that category.”

Paul said he understood why the comments went viral because he made the insult in such a chauvinistic way.

“It didn’t come out of my mouth well,” Paul said.

But what seemed to bother Paul was that people saw him as part of the pro-life movement, especially when other pro-life advocates tried to defend him on Twitter. Paul pointed out the story from last May when, after Alabama passed a law that effectively would end abortion in the state, Paul tweeted an image of those Republicans who voted for it with dicks drawn across their faces.

“The point I tried to make and it didn’t come out this way … as a pro-choice guy I’m wondering at what point does JJ’s blatant irresponsibility sexually cross the line, because he’s using abortion as a means of contraception,” Paul said. “If I’m living in a culture where I’m not allowed to ask a question, God strike me down.”

Paul and KSI will renew their rivalry in the ring on Nov. 9 in a fight you can stream on DAZN. As of this writing, Paul is about a -160 betting favorite, meaning you’d have to wager $160 to win a $100 payday.