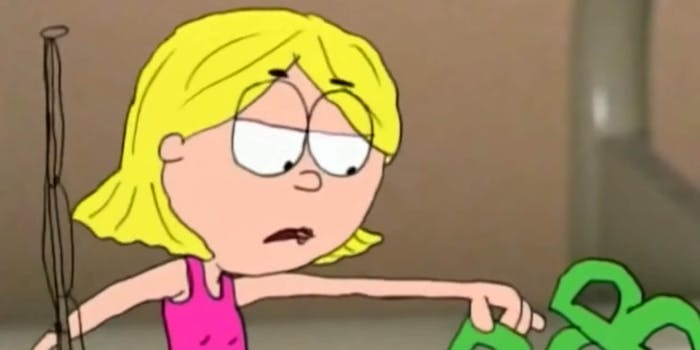 Only true Duff stans will catch it.

Lizzie McGuire is headed back to television, and fans of the early 2000s series couldn’t be more excited.

Over the years, fans of the short-lived sitcom have followed the career of Hillary Duff, who portrayed the titular character. Many of the kids who grew up on Disney’s mostly live-action series are now adults, and eagerly absorb all of the nostalgia-soaked reboots from their youths. The upcoming Lizzy McGuire is the latest of these, set to hit Disney’s upcoming streaming service, Disney+, after it launches in December. In newly released set photos from the sequel, the series revealed a simple Easter egg that only true stans of the former Disney star caught.

It all centered around an alpaca. As those fans who’ve followed Duff over the years are already aware, the 32-year-old actress is a big fan of the fuzzy camelids. Duff blames her “alpaca obsession” on Instagram, as the site spurred her interest in them. Fans noticed when photos from the Lizzie McGuire shoot included a very specific stuffed animal. A tweet from Disney+ revealed Duff, all done up in her Lizzie costume, carrying a massive stuffed alpaca.

Alpaca your bags! #LizzieMcGuire, an original series coming soon to #DisneyPlus, is heading to the Big Apple for the next chapter in Lizzie’s story. Check out this exclusive photo from the first day of production. pic.twitter.com/5h7ONvGPm9

In the video, Duff explained that some research revealed how easy alpacas are to own. Later in life, she said, she plans to own several alpacas. “I don’t have the space yet for it, but eventually I want to move so I can,” she said. She is well on her way to her own alpaca farm, thanks to a gift from her fiancé, Matthew Koma. He bought Duff her very own alpaca, a young male named Ivan. From there, her love for the breed grew.

The streaming service didn’t provide any context for the photo, but fans familiar with Duff’s obsession were quick to notice. “I love that Hil’s alpaca obsession is making it into the show,” one commenter wrote.

1) I love that Hil's alpaca obsession is making it into the show, lol.

2) I bet Lizzie's designer boss is making her run all over the city for oddly specific decor cuz they cater to clients 10x more eccentric than Franca di Monicatini (or however the heck it's spelled). https://t.co/lj1G1Nyb2t

Only REAL fans will know that Hilary Duff is obsessed with alpacas IRL and her finacé Matthew Koma adopted one for her birthday and they occasionally visit it at the farm! https://t.co/MXcQaLUbUH

Fans of the original series, which ran between 2001 and 2004, have been soaking up every fresh update on the reboot. Duff is not the only favorite actor returning to the series: She will be joined by several of her former co-stars. The McGuire brood will be back in an entirely recognizable form, as Hallie Todd and Robert Carradine, who played Lizzie’s parents, are set to reprise their roles. Jake Thomas, who played Lizzie’s younger brother Matt, is also confirmed for the reboot. We have yet to hear if Lalaine Vergara-Paras and Adam Lamberg, who portrayed Lizzie’s best friends, will return.

Fans of the duo, who played Miranda and Gordo respectively, are awaiting news of their potential involvement with bated breath. A recent Instagram post from Lalaine, in which she revealed a text from Lamberg, spurred immediate rumors. Neither actor has been confirmed, but fans are desperately hoping to hear good news soon.

❤Lalaine posted this picture on the storys today, so I made a screenshot, and a frame. Adam (Gordon) sent her a message… What did he write? Was it something related to reboot? Would that be a sign that we will have Gordon in the reboot ??? (I hope so)❤ . . . . . . . #lizziemcguire #lizziemcguiremovie #lizziemcguirereboot #lizziemcguireforever #lalaine #mirandasanchez #lalainevergara #thelalaine #davidgordo #adamlamberg #hilaryduff #hillaryduff #hilarydufffan #crush #message #throwback #childhood #early2000s #00s #reboot #2019 #octuber

Regardless of how much of the cast will be included in the reboot, the released set photos sparked excitement through the Lizzie McGuire fanbase. Even Duff’s fiancé was excited by the photos. In a comment on her Instagram post, Koma expressed his playful enthusiasm. “Ugh I can’t wait to role play,” he wrote.

There is no news on how, exactly, the Lizzie McGuire reboot will work in a giant, stuffed alpaca. Curious fans will likely have to wait until the series debuts to find out.