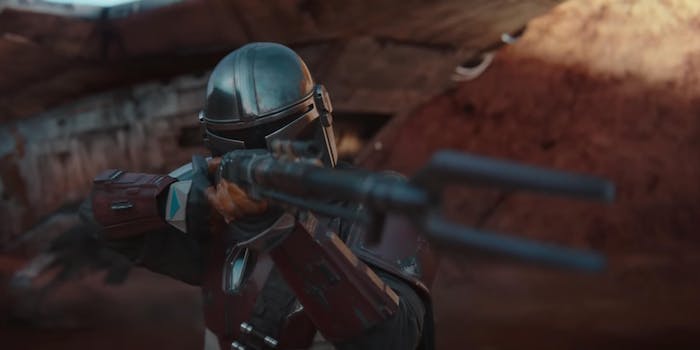 'Bounty hunting is a complicated business.'

The latest trailer for The Mandalorian, the upcoming live-action Star Wars TV show debuting on Disney+, is here, and it’s giving us an even bigger look at the complicated and dangerous world of bounty hunting.

We’ve already seen a lot of the footage—and even heard some of the dialogue from Werner Herzog’s former Imperial officer—in the trailer that debuted at D23 back in August. Herzog’s monologue assessing the Mandalorian’s skills, paired with seeing those in action, tie it more together.

But the final trailer is also expanding the world beyond an Imperial officer’s office. The lawlessness of the Mandalorian’s world takes us deep into a backwater planet and out to the stars, shows several of the characters starting to team up, a different side to a very stoic bounty hunter, and his first line of dialogue.

“Yeah?” he says when told that everyone will be waiting for him. “Good.”

The Mandalorian premieres on Nov. 12.