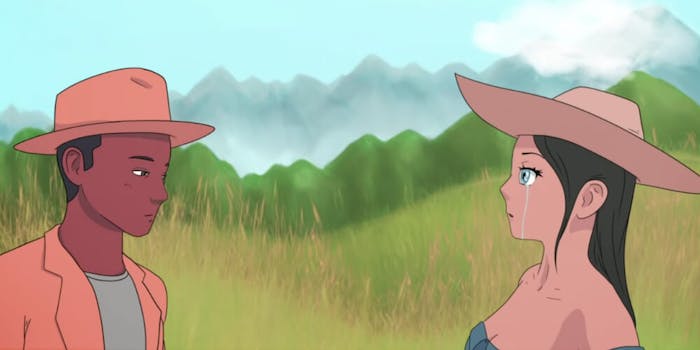 An artist was paid $50 for work that is now gracing the cover of 'July.'

Noah Cyrus enlisted Leon Bridges for the remix of her song “July,” which dropped in November.

On Monday, an artist, who goes by oakai on social media, created a tweet thread detailing how one of their customers, Jeffrey Hidy, passed off their work as his own. The artwork is now gracing the cover of “July.”

Oakai included a side-by-side of their original work and the song’s cover art. Hidy posted the latter to his Instagram account, which has since been deactivated.

“So honored to be able to showcase my artwork on such beautiful [sic] record, with my favorite person Noah Cyrus. This song was so impactful for me & being asked to be apart [sic] of this project means the world to me. So much love to Noah Cyrus and Leon Bridges,” Hidy captioned the post, according to a screenshot shared by oakai.

Mr Jeffrey Hidy has blocked me since then. He reached out, and was really nice about everything. Said he wanted to commission:

– a piece for his friend’s birthday

my commissions are for personal use only. not commercial. pic.twitter.com/hTs4hQKBBJ

According to more screenshots shared by oakai, Hidy DM’d oakai at the end of October and said he wanted to commission a piece for his friend’s birthday.

“I am doing a portrait for my friends [sic] birthday so I can put it on her journal I made for her,” Hidy wrote. “I drew her but I want her boyfriend on it and I suck at males.”

The characters featured on the artwork are supposed to be Cyrus and Bridges. Cyrus’ character is dressed the same as Cyrus in the music video for the original version of “July,” aptly released in July.

“To be clear, I didn’t realise it was a picture of Noah Cyrus until halfway through doing the commission, but I didn’t think much of it. I really should have lmao,” oakai tweeted.

In the screenshotted DMs, Hidy told oakai to “hold off on” posting the finished project to the artist’s Twitter account.

“Now i know why,” oakai tweeted.

To be clear, I didn’t realise it was a picture of Noah Cyrus until halfway through doing the commission, but I didn’t think much of it. I really should have lmao

Oakai not only later saw their work on Hidy, Cyrus, and Bridges’ Instagram accounts, but they also saw it being used as the cover art on Spotify and on YouTube.

“My commissions are for personal use only. not commercial,” oakai tweeted.

Oakai was paid only $50 for the work.

“The support i’ve been getting is incredible. thank you so much to everyone who helped and reached out to spread this. i just wish for this situation to get cleared up, please dont send any harmful messages if there have been any,” oakai wrote, ending the thread.

Cyrus responded to the thread, acknowledging she was unaware that the artwork came from oakai.

“Well shit. I had no idea! Your work is so beautiful and I want you to help work on new art for this remix. sending you a dm now,” Cyrus wrote.

Update 8:50pm CT, Jan. 7: A spokesperson for Cyrus told the Daily Dot that Cyrus’ team is currently speaking with oakai.

Bridges has since credited oakai for the art on Instagram.

The Daily Dot has reached out to Noah Cyrus, Leon Bridges, and oakai.