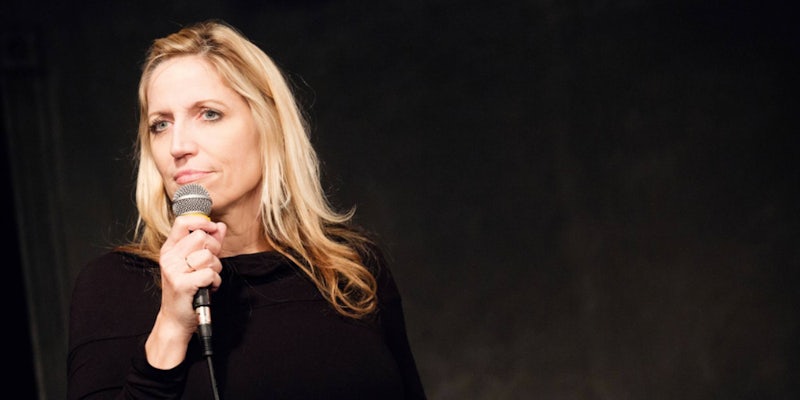 'Jokes are the only way I can manage my emotions.'

In February 2014, comedian Laurie Kilmartin performed for a different crowd. She tweeted as her father lived out his last days in hospice and cancer took his body, musing on big-picture questions about death and family as well more casual ones.

I said, "Grandpa's dying," and my 7 yo son looked up at me with his big brown chocolate drop eyes and said, "what about his iPad?"

Nearly three years later, 45 Jokes About My Dead Dad, out Dec. 29 on Seeso, offers context for those tweets. Kilmartin—a writer on Conan and co-host of The Jackie and Laurie Show—opens with a knock-knock joke about her dead dad, but the special has the added benefit of interviews with fellow comedians, as well as Kilmartin’s mom and sister and archival footage of her father, Ron.

Kilmartin gives herself over to emotion in parts, and we see touching video of the family making jokes about Ron’s newfound internet fame. 45 Jokes’s emotional pull gives it depth not typically seen in an hour-long standup special, but she also relishes the gallows humor: “I missed his last breath because I was on my iPhone.” Elsewhere, she remarks that her father died doing what he did best: growing tumors.

“Jokes are the only way I can manage my emotions,” Kilmartin says by phone. “Otherwise I would be a ball of rage and tears.”

In the special, she explains that tweets were also “notes to myself,” so she could remember everything that was happening. However, when she tried to do the material live, she got some negative responses, something she had to work through.

“It was always tough to introduce it into a set,” she says. “People are there for dick jokes. So it’s hard to go into a serious topic. You’re going to lose some people for sure. … After he died, I wasn’t used to saying my dad died… It took me a long time to get comfortable with it, and part of that response was my newness at it.”

But on Twitter, she says the response was mostly positive. “There were a couple people who thought it was unseemly, but those are people who complain after a show to the manager about one joke,” she says.

Kilmartin currently lives with her 79-year-old mother, JoAnn. In the special, she paints a more complex relationship with her mother, though JoAnn admits she’s often the butt of her daughter’s jokes. During our conversation, Kilmartin relates that she’s locked the door so her mom can’t just walk in. Growing up, her dad was “the easy one” while her mother was “just kind of violating a lot of emotional boundaries.

“We still have that relationship,” she adds.

While 45 Jokes doesn’t really dive into politics—beyond Kilmartin telling audience members they have her “feminist permission” to look at her boobs if they don’t like certain jokes—Kilmartin’s very vocal about politics on Twitter. When asked if comedians should be more political, especially under the specter of President-elect Donald Trump, she muses, “It must be thrilling to be a political writer on SNL now… and also terrifying,” and adds that while comedians can use the stage to talk about issues, when you start “naming names,” you have to anticipate pushback—something Wanda Sykes and Amy Schumer experienced this year.

“Being a female comic is still very political,” she adds. “You’re demanding people listen to you for an hour.”

As for new material, Kilmartin’s hopeful.

“My mom is 79, her death is coming,” Kilmartin says. “I need new material so I need you to wind this down, OK?”