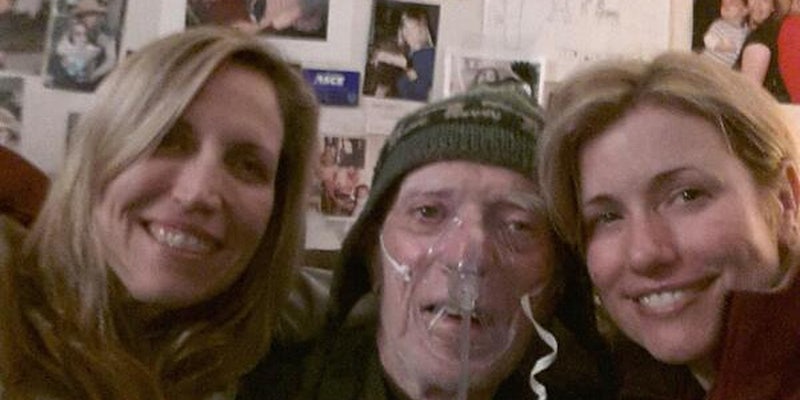 This comedian is livetweeting her father’s death

Kilmartin is finding solace in Twitter by posting her thoughts as she tries to process everything happening before her eyes.

Standup comedian and Last Comic Standing finalist Laurie Kilmartin has been livetweeting her experiences witnessing her father’s final days with more than 12,000 of her Twitter followers.

Her father was diagnosed with terminal lung cancer and was moved to hospice care on Feb. 20. Kilmartin and her family have been there ever since to take care of him and spend their last few days together.

But while they’re having those final moments, Kilmartin is finding solace in Twitter by posting her thoughts as she tries to process everything happening before her eyes. They’re full of humor and sarcasm, but there’s plenty of emotion and a hollowed sort of sadness to them.

Hospice said signs my Dad’s body is shutting down: loss of appetite, loss of thirst and him looking me in the eye and calling me “handsome.”

Even the most mundane tasks can be humorous.

Every day, I set a new goal of not seeing Dad’s genitals when I help him off the toilet.

Sister is lovingly giving 83 yo Dad his first-ever foot rub. OR… Sister is about to get kicked in the face. Both statements are accurate.

And for anyone dealing with cancer, it can especially hit close to home.

It gained even more traction once Patton Oswalt tweeted it to his 1.6 million followers.

Guys, @anylaurie16 is Live Tweeting taking care of her rapidly-dying-from-terminal-cancer dad and it is epic.

As Twitter becomes more integrated into our lives, more people are using it to deal with their own diagnosis and the mortality of a loved one. Last year, NPR’s Scott Simon livetweeted his mother’s last few days, and Lisa Adams uses Twitter to write about her cancer diagnosis.

It’s sparked a conversation, and just like anyone else, Kilmartin is still learning.

@Brian_Z_ @pattonoswalt I’m trying to figure out what isnt

Update: On Thursday, Kilmartin’s mom cut off the oxygen supply.

Heads up, new followers. After my Dad passes on, I’m going on a dick joke cleanse.

just tried to weasel out of changing Dad’s sweatshirt by arguing its more damp than wet.

priest stopping by tomorrow. note to self: hide son.

Mom just told Dad, “I love you, hon” while stepping on and cutting off his oxygen supply. This is their marriage in a nutshell.