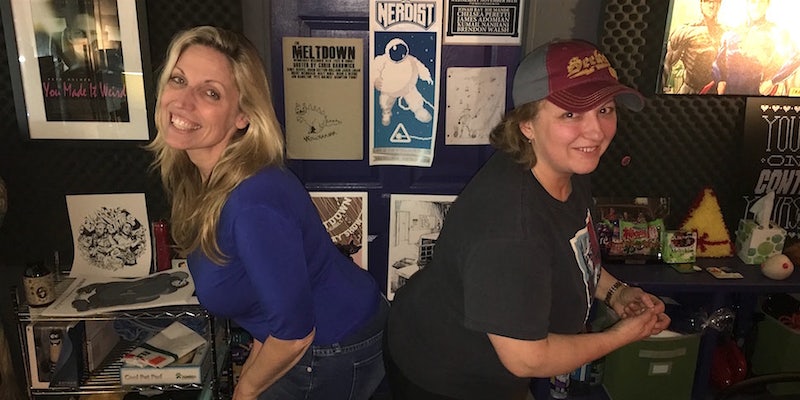 Women of a certain age.

On the latest episode of their podcast, comedians Jackie Kashian and Laurie Kilmartin relate that they’ve been doing comedy for “about 7,000 years” while addressing a recent run-in with a promoter who invited them to get “feedback” on their sets. Kilmartin is more measured in her response, but Kashian tells the man, “I don’t want feedback,” while pretending to put a gun in her mouth.

“But he didn’t pick up on that,” Kilmartin said. “He still invited you.”

This is the back and forth of The Jackie and Laurie Show, one of the new podcasts in Nerdist’s recent six-show expansion. Kashian (host of podcast The Dork Forest) and Kilmartin (a writer on Conan) have an ease with each other, and having been doing comedy since the late ’80s, they “have more information about shitty one-nighters than anyone,” Kashian said. They also noticed an absence of women of a certain age hosting comedy podcasts, but Kashian points to a more foundational reason for starting it.

“I love that almost every single time I’ve been interviewed, they’re like, ‘What’s it like being a woman comic?’” Kashian said. “And I think we were like, ‘Let’s answer that damn question every week.’”

The Daily Dot asked them some damn questions about getting paid, getting older, and getting on stage.

In Hollywood women often have to reinvent themselves to stay relevant. Is there that feeling in comedy as well?

Kashian: I think we’re trying to figure that out, aren’t we?

Kilmartin: Yeah, definitely. I think when we both started, we were probably the youngest comics on the scene, or one of the younger ones. And then it sort of morphed into, now we’re like the oldest ones showing up at gigs, and it’s a weird transition. … It is something you have to figure as you age, whether you’re male or female.

Kashian: A lot of the women who are our age now [who were doing comedy] in the ’80s, it’s like, where the hell are they? Did they keep doing standup? How did they change themselves to keep working? The famous women who kept doing standup were like Joan Rivers and Phyllis Diller, who were 30 years older than we are.

Kashian: It’s kind of freeing. We’ve both said, “Well, we’re not gonna stop. Get off my ass.”

Kilmartin: You mean freeing as in not getting paid?

Kashian: Money certainly has its own issues, but freeing in [a] way where we can also just go, “I’m going to make my own choices in this thing. I’m not going to let society or some weird club owner tell me that I’ve aged out of it, because you’re still booking that guy.”

Kilmartin: Part of what we’re doing with the podcast is, a successful podcast gets you a new audience to come see you.

Are you seeing a disparity in what women are paid in comedy?

Kashian: I think there’s a disparity in what people are paid in comedy.

Kilmartin: It’s kind of hard to tell because no one tells you what they make. If you’re famous, you make a lot more money and most of the famous comedians are male.

Kilmartin: You either have to negotiate or have someone negotiating for you.

Kashian: This is what I do, and I’m crazy; I was raised to ask and talk about money all the time. So when I do a new club, I call the previous six months’ worth of comics, whether they’re men or women, if I know them. If there are three or four comics that I know, at least two of them will tell me what they make. There’s no other way to know. … I usually try to pick guy comics who have the same type of credits I do. And if I pick a comic who has more credits than me, I try to sort of scale back from that. Because I’m a woman and I have self-esteem issues. But I’m also a comic and I have self-esteem issues.

Do you have any thoughts on the recent Amy Schumer joke-theft issue?

Kilmartin: We don’t think anything was stolen, and it’s ridiculous.

Kashian: Yeah, we don’t think about it a lot.

Kilmartin: It’s something that should have been between the comics involved and unfortunately people tweeted to the whole world, and then—

Kashian: And then we all paid attention.

Kilmartin: Amy’s famous, and she’s for gun control, and that brings out these insane trolls who have no interest in comedy. They want to take down somebody who’s Chuck Schumer’s cousin. So it just turned into this craziness that was completely unnecessary.

Kashian: Have you ever had a joke stolen, Laurie? I don’t think I’ve ever had anything stolen.

Kilmartin: Not that I know of, or word-for-word. Topic-wise, you might see someone and you’re like, “I’ve been doing something like that for a long time and you’ve been in the room.” Unless it’s a super-specific bit… you’re better off just moving on and writing new stuff. … Comedy is newly mainstream in a way—standup is—where it wasn’t as popular as music but now it’s getting as popular as music. And now everyone’s got opinions but they’re not that informed about how comedy is created. So it leads to shit like this, I think.

You’ve talked about this on the podcast, but why did you think the Beth Stelling Instagram post was so important?

Kashian: All the young comics I know are willing to talk about stuff.

Kilmartin: I’m going to guess a lot of female comics have a story that’s similar. It’s really hard to talk about your reality, if that’s your reality, in front of a regular crowd. So there are going to be outliers that are going to start it on the coasts. So in alternative rooms in L.A. or New York, you have comics talking about sexual assault and figuring out a way to make it funny. We know a couple comics who have just written amazing, funny jokes based on true, horrific events, and the audience goes with them on that. The more people are talking about their lives and what’s happening with them, the more the audience gets better at going with it. … I love that female comics are talking about that stuff, but I think in Beth’s case, everyone in her circle knew the dude she was talking about, and she just wanted to get it out there on Instagram and not be pummeled with questions after doing a bit.