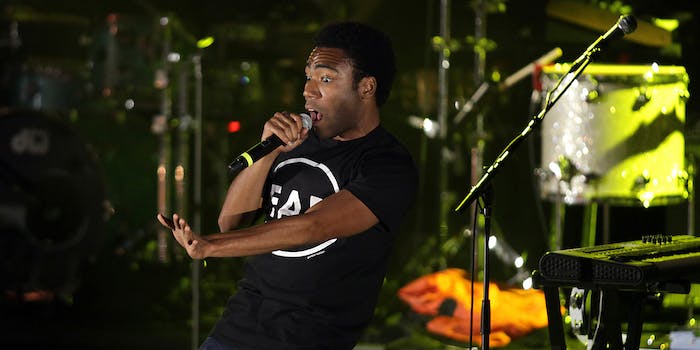 Photo via The Cosmopolitan of Las Vegas/Flickr (CC-BY-ND)

Childish Gambino fans received shocking news at the Governor’s Ball Music Festival over the weekend, when the artist hinted that he only plans to release one more Gambino album.

“You’re in my heart,” he said, following a performance of “Redbone” from his most recent Childish Gambino record Awaken, My Love! “I’ll see you for the last Gambino album.”

It’s no secret that Donald Glover—the man behind actor behind Childish Gambino—leads a busy life. This year alone, he snagged a handful of big roles following the success of his television show, Atlanta.

Glover has been cast to play Lando Calrissian in Disney’s Han Solo film and will voice Simba in a live-action remake of The Lion King. He most recently announced he will be a part of FXX’s new Deadpool series.

Even with the promise of added roles for Glover, however, Gambino fans were understandably upset to hear the news.

Childish Gambino: I'll see you for the last Gambino album
Me: pic.twitter.com/XwkTE9JaKF

Me when childish gambino said his upcoming album will be his last pic.twitter.com/1VWS9PjwcL

childish gambino really just announced his next album will be his last and i'm on the verge of a mental breakdown at 5 a.m.

childish gambino apparently announced that his next album will be his last pic.twitter.com/qL8jSvEK6c

Glover’s hip-hop career isn’t his only project taking a hit from his film work. In January, he announced a second season of Atlanta would also be delayed.