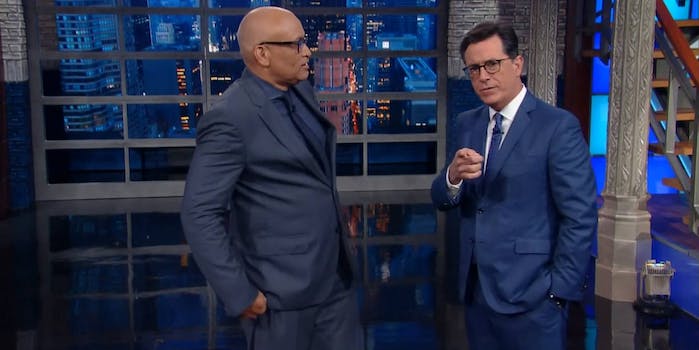 Screengrab via The Late Show With Stephen Colbert/Facebook

Stephen Colbert had to ruin the fun.

After only 14 days out of the talk-show hosting game, Larry Wilmore made his triumphant return to the late-night airwaves on Thursday to perform a monologue filled with jokes about race and current events. Well, for a minute anyway.

Wilmore—who hosted the Nightly Show on Comedy Central until the game-changing show was cancelled last month—popped up on the Late Show with Stephen Colbert on Thursday, emerging from backstage to complete one monologue joke about Donald Trump.

That’s when Colbert rapidly walked out to the stage, tapped Wilmore on the shoulder, and reclaimed his show.

“I thought whoever leaves 11:30 at Comedy Central just gets the Late Show,” Wilmore said when confronted. “I thought that’s how it worked.”

Here’s the bit in all its glory.