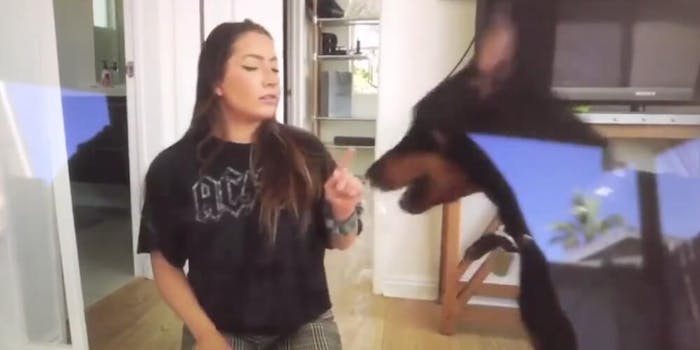 YouTube star Brooke Houts will not be charged with animal abuse

Houts accidentally uploaded footage of herself slapping and yelling at her dog.

About a month after a video of Brooke Houts slapping and yelling at her dog went viral, the Los Angeles Police Department (LAPD) announced it will not be charging the YouTuber with animal abuse, according to BuzzFeed News. It is also assumed that Houts will get to keep her dog.

“Animal Task Force looked into the matter … They determined it didn’t rise to the level of animal cruelty,” an LAPD spokesperson told BuzzFeed.

In August, Houts accidentally published the unedited version of the video in question to her YouTube channel, which has over 300,000 subscribers. The video showed her pushing, hitting, and what looks like spitting on her Doberman pinscher. The video was promptly taken down and replaced with the edited version.

But then the original, unedited version began making its rounds on Twitter. YouTuber Keemstar uploaded a clip of the video to his Twitter account, where it has been viewed almost 50 million times. The video prompted widespread outrage on social media.

Ew what the actual fuck

This is disgusting. @YouTube needs to remove her from the platform NOW! Please join us in speaking out to them. https://t.co/hwzflUrrHy

When the video started getting attention, Houts released a statement on her Twitter apologizing for her actions.

“My love for [the dog] is exponential and infinite, and I do everything in my day-to-day life to ensure that he is living as happily as he can. I’m sorry that my actions in that particular moment did not reflect that,” Houts wrote.

After receiving numerous complaints about the video, LAPD’s Animal Cruelty Task Force opened an investigation into the matter in August. The department has since determined there was “no crime” committed against her pet, Sphinx, according to BuzzFeed News.

Social media users are, once again, enraged by the news.

“Brooke Houts, The police department forgave you. But remember, the internet NEVER forgets tho. And every generation that has access to the internet will know who you are. Dog abuser,” Twitter user @allybee96165237 wrote.

Brooke Houts will NOT be criminally charged for animal abuse. What a travesty. What she did was absolute trash. She deserves to lose her dog and be behind bars

The police department forgave you.
But remember, the internet NEVER forgets tho. And every generation that has access to the internet will know who you are. Dog abuser.