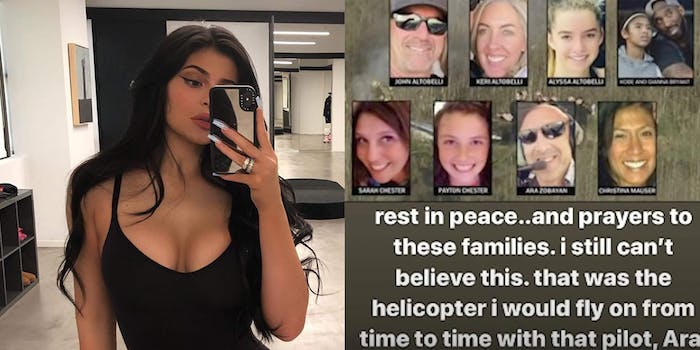 She said she rode the same helicopter that crashed.

Kobe and Gianna Bryant’s fatal helicopter crash—which also ended the lives of seven other passengers—hit home for Kylie Jenner. But her public statement on the tragedy didn’t quite land.

After days of silence, the mogul said Wednesday in an Instagram Story that she was a frequent flier on the same helicopter and that she once rented the chopper for a birthday event for Dream, her brother Rob Kardashian’s daughter. Jenner also noted that she knew the pilot, Ara Zobayan.

“Rest in peace and prayers to these families,” Jenner wrote along with a photo of the people who died in the crash. “I still can’t believe this. That was the helicopter I would fly on time to time with that pilot, Ara. He was such a nice man.”

“That was the helicopter i would fly on from time to time with that pilot, Ara. he was such a nice man.” pic.twitter.com/bmojauHLhR

She also tweeted that she was “praying” for the Bryant family.

at loss for words right now. praying for this beautiful family. pic.twitter.com/tjKUYXCUgb

But the sentiment was ill-received. Jenner faced backlash for what people saw as inserting herself into a tragedy for clout. One person commented: “#TheKardashians always find a way to insert themselves and make their names relevant when it’s totally NOT ABOUT YOU.”

Some commenters were even blunter, criticizing both Jenner and news outlets that reported on her comments.

“There’s not one person who gives a fuck about Kylie Jenner flying in Kobe’s helicopter,” one person wrote.

There's not one person who gives a fuck about Kylie Jenner flying in Kobe's helicopter. Do better TMZ. https://t.co/AG4XLiN8ov

@KylieJenner your the most selfish person EVER!! Kobe died. Kobe Bryant passed away and all u can do is talk about how u used the helicopter for stormi’s birthday. Fuck you. Always trying to get the attention. No one gives a shit about ur launch. Everyone cares about Kobe.

TMZ was similarly blasted on Sunday for breaking the news of Bryant’s death before the families of the deceased had been informed by authorities.

LA County Sheriff rightly slams TMZ for breaking the Kobe news before his family could be informed. They are a despicable organization.

Stop giving TMZ credit for being first to report Kobe’s death when they did it before next of kin had been notified, they’re still the same fucking ghouls they’ve always been. Imagine learning your husband or father died on fucking TMZ