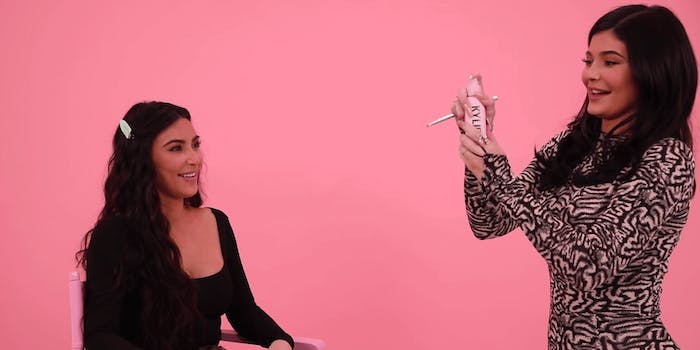 'Why the f*ck is this not working?'

The Kardashian-Jenner family is exceptional at two things: beefing with each other on reality TV or selling their numerous makeup products. In a recent YouTube video, Kim Kardashian and Kylie Jenner manage to do both.

The makeup moguls posted a “get ready with us” tutorial on Tuesday showing Jenner applying a full face of makeup for Kardashian. In the clip, Jenner uses products from both of their lines, KKW Beauty and Kylie Cosmetics. But just when Jenner is ready to finish up with setting spray, her product refuses to work.

“It’s a new one. Why the fuck is this not working? Hold on,” Jenner said in the video.

“When Kim looked into the camera and said ‘cheap shit’ I lost it,” @qiperika tweeted.

Neither sister has spoken publicly about Kardashian’s reaction to the Kylie Cosmetic’s setting spray.

But even if the setting spray takes a hit on the market, Jenner who’s worth over $1 billion, will probably be just fine.