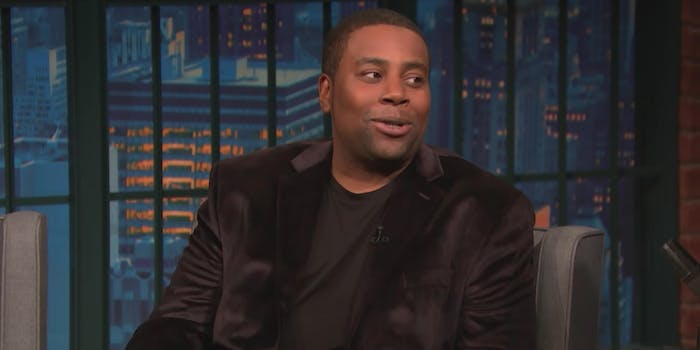 The dinner is also set to include a performance from Hasan Minhaj.

Saturday Night Live star Kenan Thompson was confirmed on Tuesday as the host for the 2020 White House Correspondents’ Association Dinner.

The dinner—slated for April 25—is also set to include a performance from Hasan Minhaj, a former senior correspondent on The Daily Show who launched his Netflix series, Patriot Act with Hasan Minhaj in 2018. Minhaj previously served as the dinner’s host in 2017.

“Kenan and Hasan are two of the most engaged and engaging entertainers in America. I’m thrilled they’ll help us celebrate the role of a free press in our democracy,” said Jonathan Karl, president of the WHCA and chief White House correspondent for ABC News, according to the New York Post.

According to the Post, the association will debut two new awards at this year’s dinner: the Katharine Graham Award for Courage and Accountability and the Award for Excellence in Presidential News Coverage by Visual Journalists. For statehouse reporting, the inaugural Collier Prize for State Government Accountability, selected by the University of Florida’s College of Journalism and Communications, will also be presented.

It’s unclear whether President Donald Trump—who opted not to attend the first three dinners of his presidency—will make an appearance at this year’s event.

Thompson is in his 17th season on Saturday Night Live, where he’s set a record for the most celebrity impressions performed on the show, according to the Associated Press. In 2018, he received an Emmy Award for original music and lyrics and a nomination for supporting actor in a comedy series, it reports.“We’re looking forward to a lively evening honoring the most important political journalism of the past year,” Karl told the Hollywood Reporter.