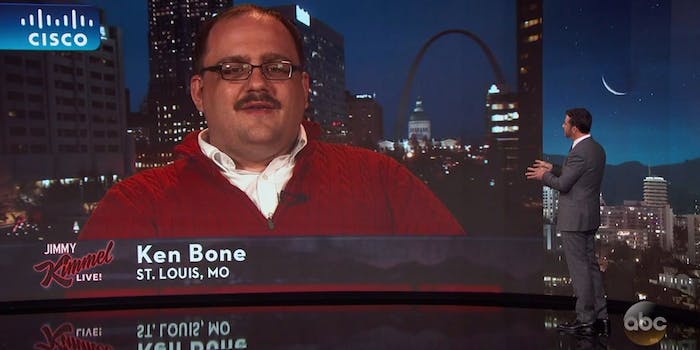 The best part of the second debate happened on late-night.

Folk hero Ken Bone, the undecided voter who asked Donald Trump and Hillary Clinton about fossil fuels during the second presidential debate, has had quite the day. In just 24 hours, he has made the media rounds, been turned into an instant meme and future Halloween costume, had his sweater sell out online, and then topped it all off by phoning into late-night TV.

Calling in from St. Louis, Bone (who’s pretty proud of his name, by the way) chatted with Jimmy Kimmel about being internet famous and his viewpoints about the election, of which—if anyone had hoped he had come to some kind of decision about who he’d vote for in November—he’s still very much undecided.

“Donald Trump may be more in line with my economic interests because I work in coal, electricity, but I really hate for anyone’s rights to be taken back,” Bone said. “We fought so hard for marriage equality and rights expanded to more Americans, and it’d be unconscionable for me to see those taken away by a Supreme Court justice appointed by Donald Trump.”

He also explains why the audience had disposable cameras and credits his fashion style to his wife, who dresses him “like all great Americans.”