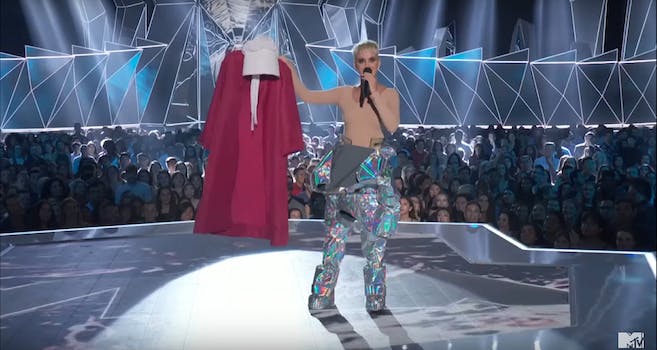 Following up on a summer of controversy, cultural appropriation, and a bumpy album release, Katy Perry landed in a space suit on the stage of the 2017 MTV Video Music Awards Sunday to host.

Unfortunately, a lot of Perry’s bits and one-liners fell flat with the Twitter audience, and plenty of people experienced secondhand embarrassment on behalf of the failed material. Some of Perry’s onstage moments were more cringe than others, at least.

Seconds into her opening monologue, Perry brand-dropped Yeezys and pulled a red dress and bonnet from a rolling rack in reference to A Handmaid’s Tale.

“Very retro pilgrim,” she said, making light of a show about the commodification of women’s bodies, rape, and totalitarianism.

Perry also played with a fidget spinner because, you know, that’s what the kids are doing.

How do you do, fellow kids?

Later in the show, Perry flirted (?) with Harry Styles and stroked her own breast while addressing him.

In some upsetting syntactic gymnastics, Perry managed to work “shooketh” into a sentence before saying, “My wig is snatched.” It was rough. So rough.

Even celebrities in the VMAs audience were cringing—or at least staring blankly into space and not laughing.

Jack Antonoff bored and eating a banana during Katy Perry's intro is all of us watching this intro. #VMAs pic.twitter.com/QXgE3H3VIM

Overall, Perry’s jokes at the VMAs were the equivalent of your mom picking up on a trend months after it’s over. Or this.