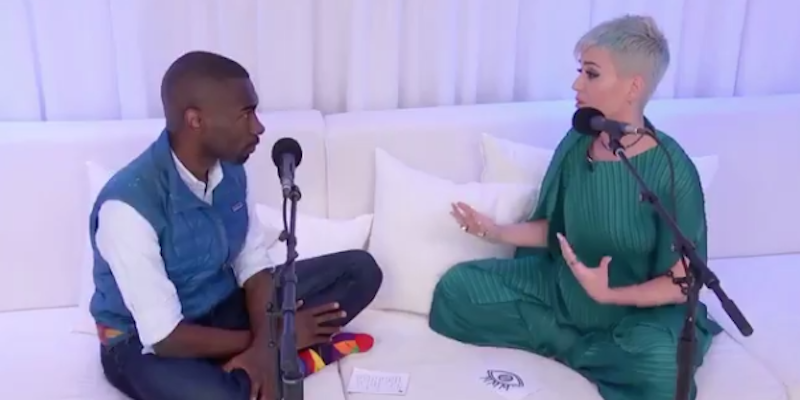 It’s been a wild weekend for Katy Perry.

After a bumpy album release Friday, the pop star has been hosting a 24-hour, Big Brother-style live stream leading up to a performance Monday evening. The YouTube experience ran all weekend long, granting fans visual access to a house where a barrage of celebrities, media figures, and inspirational civilians stopped by to discuss politics, relationships, and how the prop cupcakes on Perry’s “California Girls” bra were probably too big, in retrospect.

But things took a turn for the serious when prominent Black Lives Matter Activist Deray McKesson sat down with the singer for his podcast Pod Save the People on Saturday. The topic of cultural appropriation came up, and Perry seized the opportunity to apologize for past misdeeds. The singer, who was raised by two evangelical ministers, has almost compulsively run into trouble with appropriating minority cultures over the course of her career. The biggest examples are probably the 2013 American Music Awards performance here she dressed as a geisha, and the “This Is How We Do” video where she has her hair in braids and eats watermelon, but her wake is littered with smaller artifacts, too, like the often-buried 2008 song “Ur So Gay.”

In the interview, Perry admits that she’s “made several mistakes” over the years, and also confesses that she didn’t realize her actions were hurting people. She credits conversations with friends like her “empowered angel Cleo [Wade]” for opening her eyes.

“I listened, and I heard, and I didn’t know,” Perry told McKesson. “And I won’t ever understand some of those things because of who I am. I will never understand, but I can educate myself, and that’s what I’m trying to do along the way… I didn’t know that I did it wrong until I heard people saying I did it wrong. And, sometimes that’s what it takes. It takes someone to say, out of compassion and out of love, ‘Hey, this is what the origin is.'”

As Refinery 29 points out, though, the gesture seems like too little too late for many fans on Twitter. The appropriative performances and videos helped launch Perry’s career—one of the biggest in modern music history—so a simple apology isn’t quite going to untangle the cultural wires her continued popularity causes. (Perry is still the most-followed person on Twitter,with a 3.4 million-person lead over No. 2  Justin Bieber.)

Hi, my name is Katy Perry and I have not made my entire career off the backs of LGBT and cultural appropriation pic.twitter.com/65EXAopYts

The criticism poured over to Deray’s mentions, too. Fans questioned why he’d provide a platform for someone who has so often used minority cultures as a platform for her own career, and McKesson explained how he decided to do the interview in a tweet thread Sunday afternoon:

I started #PodSaveThePeople with the goal of discussing activism, race, equity, and solutions with a range of people in a candid way.

I invited Katy Perry to talk on the podcast b/c of her role on the HRC campaign, how she views her art + activism, & her past re: race.

And yes, we talk about race, appropriation, what she's doing to grow and learn. And I ask one/two questions about music.

While Perry’s apology definitely wasn’t as nuanced and thoughtful as some of her fans (and critics) wanted, it at least puts a stake in the ground with regard to how she sees the rest of her career going. And hey, maybe Witness will mark the singer’s first appropriation-free round of record promo.