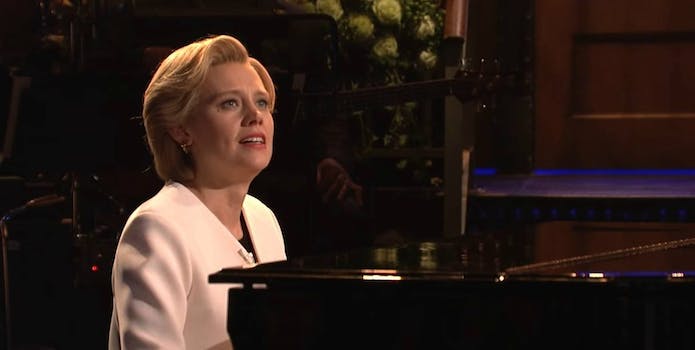 It was the perfect way to open 'SNL.'

With Alec Baldwin spending so much time this year playing Donald Trump on Saturday Night Live, you can forgive the show’s writers if they thought Baldwin’s role on the series wouldn’t last much past this week’s episode. But, in case you haven’t heard, Trump is now the president-elect, and the series will have to reckon with finding a suitable impressionist who can play him for the next four years.

But on Saturday night, SNL had another idea in mind for its cold open. It didn’t feature Baldwin’s Trump at all. Instead, following the death of legendary singer-songwriter Leonard Cohen this week, Kate McKinnon, plying her well-regarded Hillary Clinton impression for perhaps the last time, opened the show sitting at a piano, singing her own cover of Cohen’s “Hallelujah.”

It’s a must watch:

McKinnon’s voice sounded pleasant and strong, and it was a surprisingly beautiful rendition. And the cover was an unmistakable metaphor for what happened to Clinton’s political hopes last Tuesday. Even if she does, in fact, never give up.