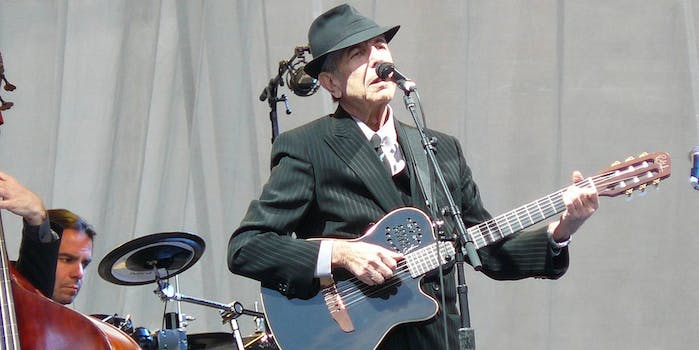 Leonard Cohen died Thursday at the age of 82.

Beloved songwriter Leonard Cohen died Thursday at the age of 82, and in the wake of his death, he leaves behind a legacy that according to his manager will “bring insight, inspiration, and healing for generations to come.”

He also left behind this moving letter that he sent to his dying muse, Marianne Ihlen, in July. The words Cohen used and the note he received back, via the Letters of Note Twitter account, are tear-jerking yet also might provide inspiration to those who are torn apart by music’s devastating loss.

Leonard Cohen's recent letter to his dying muse, Marianne Ihlen, takes on a new poignancy with the sad news of his death. pic.twitter.com/dkRz8U4x3M

The “I am so close behind you that if you stretch out your hand, I think you can reach mine” passage is so heartbreaking and yet so self-aware that perhaps it somehow will comfort Cohen’s fans to believe he’s, once again, with the woman who inspired him so deeply.

Here was the response sent back to Cohen.

And here is the beautiful reply sent to Leonard Cohen. pic.twitter.com/2AwRGwZQLe

To read more about the touching relationship Cohen and Ihlen shared, read this from Cohen’s Facebook page after her death.