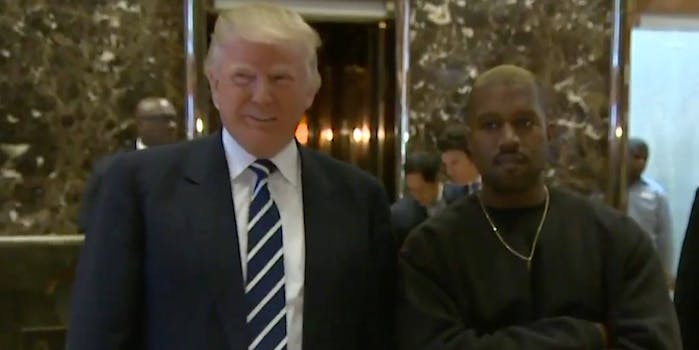 Why is Kanye West meeting with Donald Trump?

Kanye West is meeting with President-elect Donald Trump. Apparently, he wasn’t kidding when he said he’s running for president in 2020.

Kanye (and entourage) arrives for a meeting at Trump Tower. Real life. pic.twitter.com/W9PQDgfQmg

Trump spox Hope Hicks emails me @kanyewest is at Trump Tower "Meeting with the President-elect."

Trump spox Hope Hicks confirms @kanyewest is meeting with the president-elect, though it is still unclear why.

Kanye West just arrived at Trump Tower. He did not answer questions, per pool.

West reappeared in the lobby, this time with Trump, shortly before 10am ET. Trump told press that he and West have been friends a very long time and that they were meeting to discuss “life.”

Twitter is having a field day trying to comprehend the meeting.

"We've been friends for a long time": Kanye West and President-elect Trump appear together at Trump Tower https://t.co/QoofBJzY1x pic.twitter.com/DK6z1P9LhG

Trump has no time/interest for Daily Presidential Intel Briefing. But has time to meet w/Kanye West. Like I said, u can't make this crap up. https://t.co/DnuITXbV3y

Remember when @kanyewest said he would have voted for Trump….just when up the golden elevators

The Daily Dot has reached out to Hicks for comment.

Update 2:27pm CT, Dec. 13: West said via Twitter that the nature of his meeting was to talk about “multicultural” issues. As of this writing, he’s yet to elaborate.