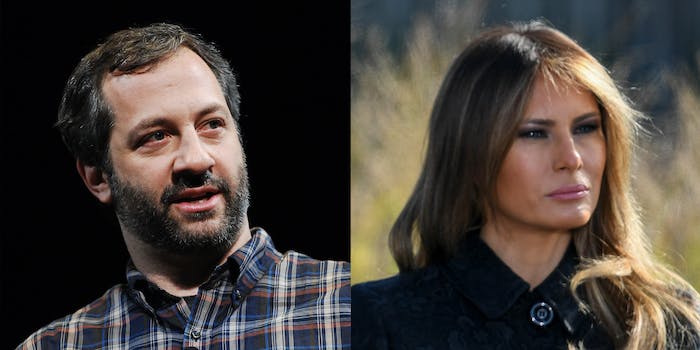 These celebrities are furious.

Judd Apatow is holding Melania Trump to her “be best” tagline.

The first lady caused a stir on Twitter late Tuesday, after tweeting about enjoying tea with the Queen of Spain and chatting about “the ways we can positively impact children.” Her anecdote registered as tone-deaf to a handful of celebrities, who voiced concern about recent news of more than 2,000 children being separated from their families and held in detention centers at the U.S. border. It’s a policy that has caused huge waves of backlash for the administration. Tuesday evening, Rachel Maddow cried on-air when the Associated Press broke news that separate “tender age” shelters have been set up for infants and toddlers.

So Apatow lead the charge in Trump’s mentions Tuesday night, calling her remarks “pointless” because they “request no hard changes.”

You are part of an evil regime. You support evil with your silence. You could have a major impact if you spoke your mind but you allow children to suffer by putting out pointless statements which request no hard changes. Shame on you. https://t.co/KtGME5VVQP

Apatow wasn’t the only celebrity to take the first lady to task, though. Julia Louis-Dreyfus also took issue with the statement, joking, “Yeah, give that a good, hard think. What could you do……….?”

Yeah, give that a good, hard think. What could you do……? https://t.co/u5LItLvkFA

And Mark Duplass threw out a simple suggestion: Maybe she could, uh, visit the border. And check out the detention centers herself?

Go down to our borders. Right now. Reunite those kids with their families. https://t.co/SllQGd42CK

Trump has yet to remark on her critics.