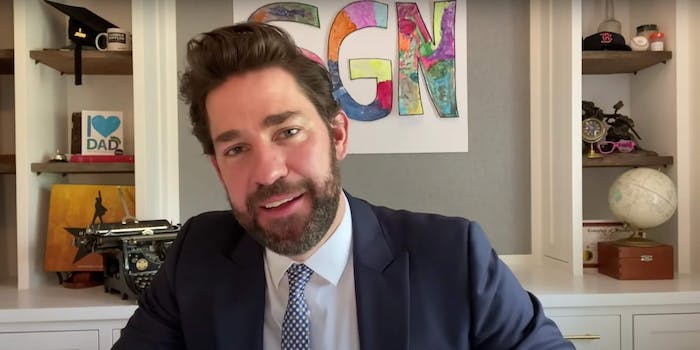 'Writing, directing, and producing—all those things—with a couple of my friends was so much.'

John Krasinski defended his decision to sell Some Good News amid criticism that he was selling out with ViacomCBS’s acquisition of the series.

Krasinski first started releasing Some Good News, a feel-good YouTube show conceptualized as a place to share and highlight positive things happening in the world amid the coronavirus pandemic, at the end of March. Over the course of eight episodes, he reunited the original cast of Hamilton, got The Office cast to help him recreate Jim and Pam’s wedding, and hosted a virtual prom before announcing that Some Good News would be coming to an end.

Shortly after the final episode aired, it was revealed that ViacomCBS won a “massive bidding war” to obtain Krasinski’s series, which will get an exclusive window on CBS All Access; while Krasinski will be an executive producer, he won’t be hosting the webseries he created.

He dodged accusations of selling out for selling his show (whose charm was at least partially in the low-scale production) to a major news organization since the announcement was made, which became even louder after layoffs at CBS News resulted in several veteran journalists losing their jobs.

Krasinski finally addressed the criticism earlier this week during an appearance on Hey There, Human, an Instagram show hosted by his Office co-star Rainn Wilson. As Krasinski put it, Some Good News was never meant to be a permanent fixture; it was something designed for the quarantine.

“Writing, directing, and producing—all those things—with a couple of my friends was so much, and I knew it wouldn’t be sustainable with my prior commitments,” Krasinski explained.

And with the amount of work making a single episode of Some Good News took, Krasinki knew that if he wanted the show to continue, he needed some additional help.

“I knew the two options were always going to be, I leave it off at eight in my office, which I would love to keep doing this show from my office forever, but it just wasn’t sustainable,” he added. “I knew I would need a partner coming on.”