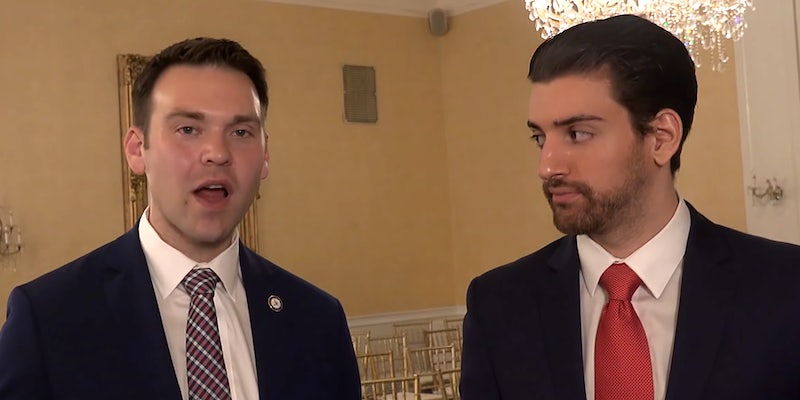 Joey Salads has come a long way from peeing in his mouth on camera. At some point since the election of President Donald Trump, the YouTube prankster decided that he’s conquered the internet enough to give politics a try. Now’s he’s mounting a campaign to unseat freshman Rep. Max Rose (D) in New York’s 11th District.

Salads earned his online fame on YouTube where he racked up millions of followers who came to his page to watch prank videos. He did some pretty outlandish things, like that time he urinated in his mouth or when he donned Nazi garb at a Trump rally.

Over the last few months, the Staten Islander has made a number of plays to refashion himself as a serious candidate. At a recent far-right rally in Washington, D.C., he wore a blue button-down and gave a serious stump speech, after which he told the Daily Dot, “anywhere I go, I run into a supporter.”

Asked how the old guard of the Republican party in New York has treated him, Salads told theDaily Dot, “the old school, the old way of doing things people … They’re not as receptive to me because they want to have their establishment candidate in there. They want to have their old way of doing things. But the newer people who are coming into the party, they all respect, they all understand what I’m doing and we’re getting a lot of positive feedback from them because they get it and they understand.”

When the Daily Dot bumped into Salads in Washington, we asked him about his polling and his fundraising and he declined to provide us with a number. That was in early July. But on July 15, Salads—like every other candidate running for federal office—filed his 2nd quarter report of receipts and disbursements with the Federal Election Commission. And it’s a doozy.

The donations listed in his form don’t show any very interesting names other than his girlfriend, Gila Goodman, who was identified in a recent profile of Salads in the Verge.

But the campaign gets truly weird in the disbursements section where we see how Salads spent his money. The first odd entry is a $450 donation to the Roger Stone Legal Defense Fund made on June 22. The fund benefits former Trump adviser Roger Stone, who was charged with witness tampering and lying to Congress as part of Robert Mueller’s investigation.

The purpose of the disbursement is labeled as “admission fee.” But there’s no mention of an “admission” on the website for the fund. A person familiar with Salads’ campaign declined to comment on the payment to Stone’s defense coffer.

On the same day that Salads’ campaign pumped money into Stone’s coffer, it also made a $206.10 payment to Jack Posobiec, a former Pizzagate enthusiast who has managed to transform his career into a sort of journalist. Posobiec is currently—and was at the time of the payment—a host at the Trump-adoring One America News Network. The reason for the disbursement is listed as “advertising — social media.” A person familiar with Salads’ campaign said they have no knowledge of the payment. Posobiec did not respond to multiple requests for comment but a search of his Twitter account does not yield any promotional results for Joey Salads.

On April 19, Salads’ campaign made another unusual expenditure: an $816 shopping spree at the Staten Island menswear store Archie Jacobson. That could violate campaign finance law. According to the FEC’s website, “the campaign cannot pay for attire for political functions (for example, a new tuxedo or dress), but it can pay for clothing of de minimis value that is used in the campaign, such as T-shirts or caps imprinted with a campaign slogan.”

In fact, there’s very little in the FEC filing to suggest that Salads is actually running for office. There are no payments listed to staffers and the most common expenditures are for parking services. The only person that seems to be on Salads’ campaign is Gavin Wax, who received a few $50 payments and a $1,500 payment for “website services.”

Wax told the Daily Dot that he’s an unofficial adviser to the campaign and said that they have not gotten into traditional tactics like door-knocking yet but said that they’ll make those moves in the next few months. They also said that in the next quarter, the campaign will surpass Malliotakis’ individual donors, but that they plan to use resources efficiently.

Rose is a first-term member of Congress and he defeated Republican Daniel Donovan. The National Republican Congressional Committee has named Rose as one of their targets in 2020 and the Cook Political Report rates the race as a Democratic-leaning toss-up.

Malliotakis is still the favored candidate in this primary. In a purple district, it’s hard but not impossible to imagine the Republicans nominating a jester like Salads. But maybe if he can buy a new wardrobe with his campaign account along the way, this effort was worth it.