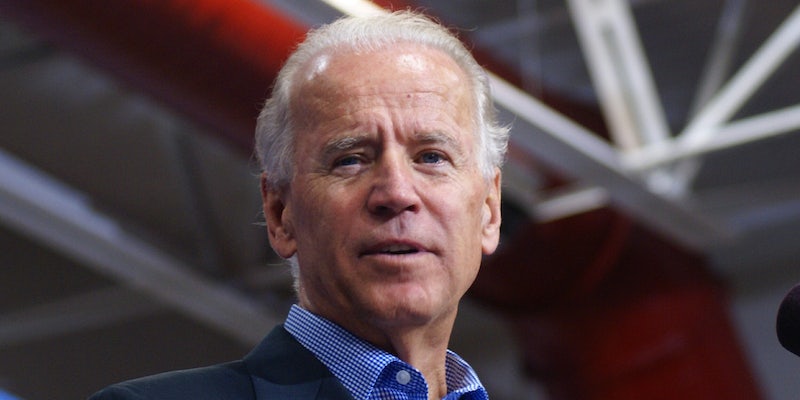 One million followers welcomed back Uncle Joe with open arms.

Joe Biden made a return to Instagram on Friday with a photo of him and his wife, Jill, chatting with veterans in New York City.

Over the course of the past three months, a team of wounded veterans from the United States and the United Kingdom have been walking across the country together — from coast to coast. They are raising awareness for the tens of thousands of warriors who return home from battle with post-traumatic stress or traumatic brain injuries. We owe them. Today, Jill and I finished the walk with them in New York City. Their courage knows no bounds, and their bond and service transcends national borders. I'm proud to know them, and grateful to have the chance to once again share my days with you here on @instagram. It's good to be back.

Over the course of the weekend, Biden racked up an impressive 1 million followers, including his old friend Barack Obama, who welcomed him back with a sweet post.

My brother and friend @JoeBiden is back on Instagram. Welcome back, Joe—you'll always be one of the rare exceptions to my no-selfies rule.

“My brother and friend @JoeBiden is back on Instagram. Welcome back, Joe–you’ll always be one of the rare exceptions to my no selfie rule,” reads the caption under a photo of the two.

Biden formerly posted under the @vp account, which now belongs to Vice President Mike Pence. Biden’s old Instagram posts are archived under the account @vp44, documenting the bond that Biden and Obama shared during the eight years they were in office.

The return has some speculating that Biden is preparing a run for President in 2020. Biden ran for that office in both 1988 and 2008, dropping out before the primaries. He declined to run in 2016, following the death of his son Beau.

At 75, Biden is on the older side to make a bid for the White House, but should announce a decision by the beginning of 2019.

Biden and Obama’s bromance was well-documented, with the two running down the White House halls, making camp friendship bracelets, and enjoying ice cream, among other activities.

A July Politico/Morning Consult poll had Biden beating out President Trump among registered voters, with Biden getting 44 percent of the vote to Trump’s 37 percent. The poll also showed that Biden did marginally better with registered Democrats than Trump did with his own party. However, Democrats said they would vote for a generic Democrat over Biden, according to the poll.

A second post added on Monday announced a new initiative between Biden and attn: to encourage potential voters to get out for the midterms.

We've become so divided in our political discourse online that we hardly hear each other anymore. We shout and attack and pay less and less attention each day to what matters. What do I mean by “what matters”? Well, for starters: this fall, millions of Americans will head to the voting booth, where they'll elect people with the ability to make real and concrete changes in all of our lives. It will be one of the most consequential elections of any of our lifetimes. We will be voting to remind the world who we are, and the people we elect will be charged with upholding our values and preserving our shared character — the things that make us Americans. Before this election, I want us to have a real discussion about what really matters — the fundamental issues that determine whether or not all of us are given a chance to live with dignity and to pursue opportunity. I've partnered with the folks over at @attndotcom to talk through some these issues, and I'm excited to start sharing our work with you in the days to come. I want to hear your feedback, your opinions and your thoughts. And I want you to take that energy with you to the polls in November. Stay tuned.