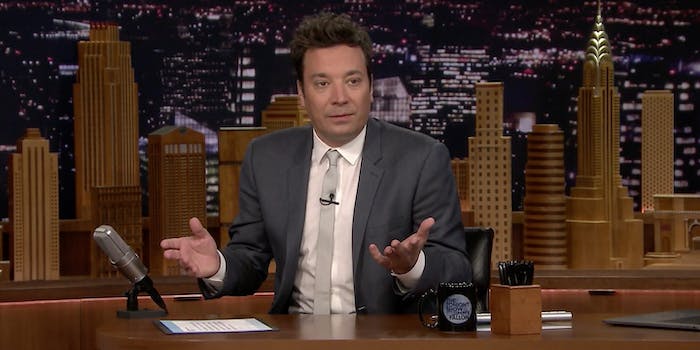 'First of all, I’ve never called this human in my life.'

Jimmy Fallon kicked off Monday’s episode of The Tonight Show by addressing President Donald Trump, who attacked the comic on Twitter for expressing regret over that now-infamous 2016 interview.

Fallon spent part of his monologue recapping what happened on Twitter, noting to Melania Trump that her anti-bullying campaign wasn’t really working.

Trump went after Fallon on Sunday night, telling Fallon to “be a man” after hearing that Fallon said he’d have done their interview differently. He also claimed that Fallon called him after the interview to talk about “monster ratings.” In response, Fallon made a donation to RAICES in Trump’s name.

Fallon moved onto his other monologue jokes, but he returned to Trump’s tweet after settling in at his desk. He took the time to explain his own rationale behind his actions in the 2016 interview with Trump, why he even addressed the topic on Hollywood Reporter’s Awards Chatter podcast, and Trump’s claim that his own interview boosted Fallon’s ratings. In the process, Fallon even made a nod to the fact that Trump’s appearance on his show may have led to a decline in his show’s ratings. (It also led to the polarization of Fallon in some parts of the internet, with some claiming that Fallon “normalized” Trump and helped get him elected; the interview comes up pretty much anytime Fallon appears in headlines.)

“First of all, I’ve never called this human in my life,” Fallon said. “I don’t have his number, I don’t want his number. And ‘monster ratings?’ … I’ve never said ‘monster ratings.’ I don’t know what he’s talking about. By the way, Donald. I don’t know if you’ve seen my ratings the past two years—you didn’t help my ratings. But really, thanks a lot. Thanks for nothing.”

Fallon promised to be more of a man—at least, he added, starting tomorrow.

Meanwhile, Trump held a rally in South Carolina on Monday, and although Fallon’s comments on The Tonight Show had yet to air by the time Trump took the stage, Trump was still attacking Fallon—along with Fallon’s late-night colleagues Stephen Colbert and Jimmy Kimmel.

“Jimmy Fallon calls me up and he’s like a nice guy. He’s lost. He looks like a lost soul. But you know what, he’s a nice guy,” Trump said. “I agreed to do his show and because I guess I was running at that time, I think, he got tremendous ratings, killed everybody, right? He should be thankful. He shouldn’t be upset or angry.”