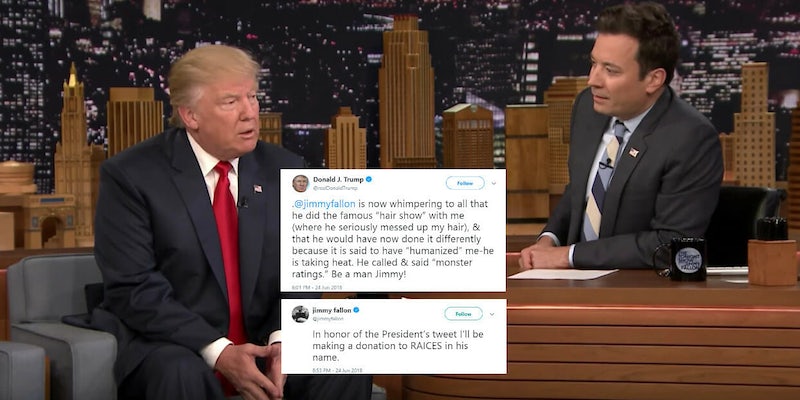 The war of words is escalating.

President Donald Trump isn’t going to let Jimmy Fallon off the hook so easily. The two are feuding on Twitter—with Trump questioning his manhood and Fallon pledging to donate to charity.

The comedian has been on a quiet apology tour, atoning for his chummy and playful interview with then-candidate Trump on The Tonight Show in 2016. He famously ruffled the president’s hair and passed on asking hard questions.

“I made a mistake. I’m sorry if I made anyone mad. And, looking back, I would do it differently,” Fallon told the Hollywood Reporter‘s Awards Chatter podcast last week.

Trump caught wind of the interview and blasted Fallon on Twitter for it on Sunday, saying that Fallon “is now whimpering to all that he did the famous ‘hair show’ with me (where he seriously messed up my hair), & that he would have now done it differently because it is said to have ‘humanized’ me—he is taking heat. He called & said ‘monster ratings.’ Be a man Jimmy!”

In other words, the president is mad at Fallon for being a fake friend who apparently cheered the interview in private but backpedaled from it when it became unpopular. In response, the late-night host trolled the president on his immigration politics.

“In honor of the President’s tweet I’ll be making a donation to RAICES in his name,” Fallon tweeted late Sunday referring to the Texas nonprofit‘s viral campaign. Driven by Facebook shares, it’s raised $20 million for immigration legal defense spending.

Trump’s “zero tolerance” immigration policy has divided Americans and sparked an executive order from the president last week that instructed law enforcement at the border to stop separating families. However, immigration enforcement continues to be a rallying point the Trump White House.

The president has yet to respond.