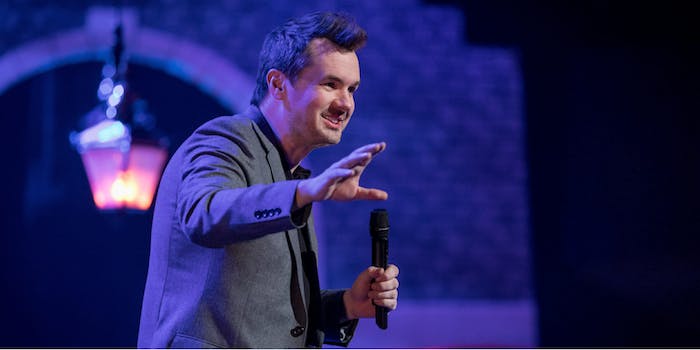 Jim Jefferies talks about parenting, depression, and 'docking' in his new special.

When Jim Jefferies did a bit about gun control in his 2014 special Bare, he was addressing the Sandy Hook shooting. But during the last four years, it’s been recirculated after a string of mass shootings, re-viralized every few months as a sensible stance for gun control. It’s lost him fans and made him more popular.

Maybe he didn’t anticipate it becoming a refrain, but Jefferies is the comic with the gun control bit, something he points out in latest Netflix special This Is Me Now. Filmed in London, the special follows up 2016’s Freedumb, which dunked on Donald Trump and Bill Cosby. This Is Me Now doesn’t focus on either, though there is an extended bit about Trump’s “grab them by the pussy” comment, followed by an exploration of the mechanics of actually grabbing one that goes on a bit too long.

Jefferies toed the line with the offensive white male comic crowd early in his career, and there are some remnants here. He tries to make a point about Trump’s comment on Mexican immigrants being rapists, slams coal-mining towns for holding on to a dead industry, and winds up with: “I dislike deaf people.” He spends an inordinate amount of time explaining the sexual act of “docking” and will no doubt see some hate mail from the anti-circumcision crowd.

But the special picks up when he gets more introspective. Jefferies takes a seat to address the gun-control routine: “I get more popular after a massacre and that’s not what I want,” he says. After the Las Vegas shooting, he said on his Comedy Central show that Americans essentially allowed it to happen, which of course didn’t sit well with some people. He revisits Las Vegas in the special, and how gun control might have prevented the tragedy before winding into the absurdity of gun ownership for “protection.” In Freedumb he also reassessed the bit, clarifying some of his statements while revealing the routine gained him a more diverse audience.

The title of the special could be broadly applied: This is a comic at 40 looking at his place in life. But a story about parenting his 4-year-old son provides another application. Elsewhere, Jefferies addresses his battle with depression and how it also affected his father, balancing out the more button-pushing jokes. However, he manages to tie his gun control bit into a story about performing at a birthday party for Mariah Carey’s boyfriend James Packer with such precision, you almost don’t see it coming.