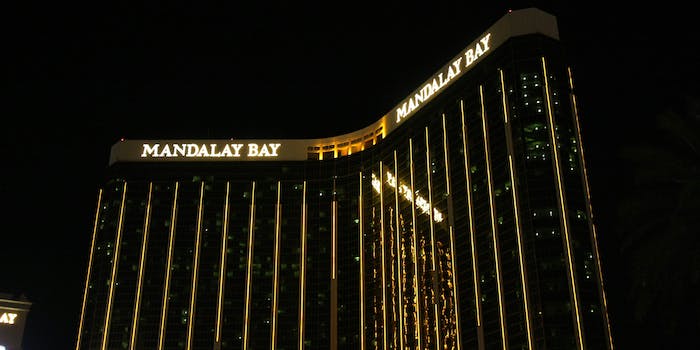 It's the worst mass shooting in U.S. history.

A gunman opened fire from a room in the Mandalay Bay Casino, shooting down at attendees at a country music festival in Las Vegas, is now the deadliest mass shooting in modern American history.

The shooting occurred during the final performance of Route 91 Harvest Music Festival, an annual country music concert with over 30,000 attendees. Musician Jason Aldean was performing on stage when, according to Vegas police, at 10:08pm PST, a gunman on the 32nd floor began shooting.

Sheriff Joseph Lombardo of the Las Vegas Metropolitan Police Department announced in a press release and briefing that 59 people were dead and 527 wounded. It is not clear how many of the casualties were the result of gunshots or the ensuing stampede.

In an earlier conference, Lombardo called the scene devastating, saying that authorities were doing their best to help the wounded.

“It’s a devastating time. We have responded to the scene, and we’re doing the best we can to provide safety to the survivors.”

Video from the scene shows victims fleeing as rapid-fire shots can be heard in succession. (Warning: This video is deeply upsetting.)

Police responded to the shooter in the Mandalay Bay, breaching the room that 64-year old Stephen Paddock of Mesquite, Nevada, was shooting from. Las Vegas Sheriff Joseph Lombardo said that Paddock shot himself as police closed in. A New York Times report said Paddock was found with at least 20 rifles. A manhunt was underway the night of the shooting for a companion of Paddock’s, identified as Marilou Danley, though this morning Lombardo sais she had been located and was not involved in the incident.

Las Vegas police tweeted out a hotline for people to call to identify family and friends who may have been injured or killed.

Aldean was reportedly rushed off stage as the shooting began. Earlier this morning, he posted to Instagram, asking for prayers.

Other performers at the three-day long festival included country music stars such as Jake Owen, Eric Church, and Big & Rich.

The Mandalay Bay, in the wake of the shooting, posted a statement to Twitter, saying its thoughts and prayers were with victims.

Our thoughts & prayers are with the victims of last night's tragic events. We’re grateful for the immediate actions of our first responders. pic.twitter.com/Arf8edj1iZ

Flights out of McCarren Airport, which services Las Vegas, were temporarily suspended due to the incident, although they have resumed. President Trump spoke this morning, calling the shooting an act of pure evil.

Trump also tweeted out condolences for the victims.

Vice President Mike Pence also shared a message of support for the victims and their families.

To victims, families & loved ones affected by this senseless violence in Las Vegas, Karen & I are praying for you & offering our love…

This story will be updated.