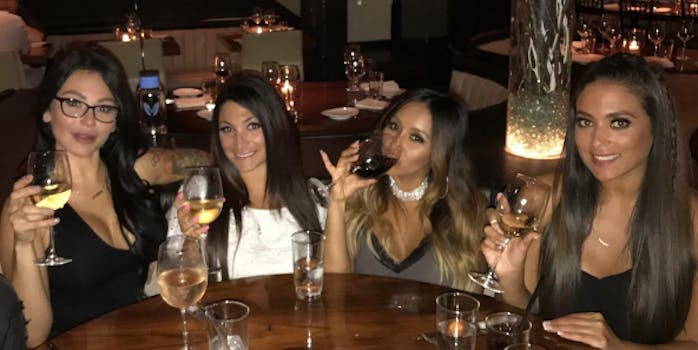 Time to get your gym, tan, laundry routine down perfect, because it looks like a Jersey Shore reunion is definitely in the works.

It’s been five years since the hit MTV reality series aired its final episode, but there have been a lot of recent rumblings from former castmates about how they’d be open to the possibility of a reunion. Now, evidence has started trickling in that taping is actually underway.

We’ll start with the subtler clues: Over the weekend, Mike “the Situation” Sorrentino Instagrammed two different headlines about the show, including wink emojis with captions like “We have a Situation” and “What in the Dirty Little Hamster is happening here.” It’s not necessarily an announcement, but it’s certainly… suggestive.

What in The Dirty Lil Hamster is happening here 🇮🇹😉 @usatoday

We have a Situation 🇮🇹😉GTL

Upping the ante, co-star Jenni “Jwoww” Farley snapped herself on a set Saturday that BuzzFeed points out looks suspiciously similar to a reality show confessional…

And considering Snooki Instagrammed herself with Deena on what appears to be a production set in late June:

Followed by Deena Instagramming herself out to dinner with all the Shore ladies that same night, it’s not a stretch of the imagination to assume the cast has been working on something together.

Thank you for having us tonight @eatstk @onegroup 💗

The juiciest evidence came via the citizens of New Jersey, though. According to NJ.com, “the show’s producer, Los Angeles-based Bright Road Productions, was granted a permit to film on the Asbury Park beach and boardwalk” over the weekend. “However, producers were denied permission to film inside the Langosta Lounge restaurant on the boardwalk.”

It seems restaurant owner Peter Mantas didn’t think his establishment would be a good venue for the taping.

“Bring those meatheads to the Langosta Lounge? No way,” he said to the Asbury Park Press.

The town of Seaside Heights (home to the original Jersey Shore beach house) also apparently declined a permit for the production company to film.

The Daily Mail contends the reunion may be a “special” as opposed to a season of TV, which would explain the erratic taping schedule, and considering a good portion of the cast are now parents to young kids, it sounds like a likely explanation.