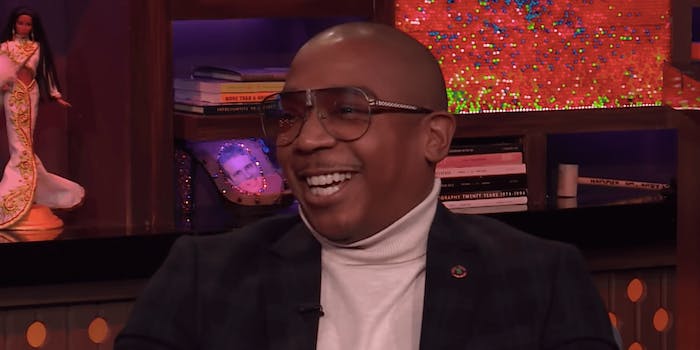 The rapper still wants to bring the festival back.

Disgraced rapper and festival planner Ja Rule appeared on Watch What Happens Live with Andy Cohen on Sunday to defend his desire to bring back the tragic Fyre Festival.

In a preview of Ja Rule’s new WE tv show, Growing Up Hip Hop: New York, the rapper tells his kids he plans to reboot the notorious festival. Cohen referenced this sneak peek during his “Rapid Fyre” Q&A and posed the obvious question, “Why do you think people would trust you to go to that festival?”

“Well, I mean, it wasn’t my fault, right?” Ja Rule responded. “Here’s the thing, Andy—I want to do it the right way with the right partners. And here’s what I happen to know: I have the biggest festival in the world, even though it never happened.”

Cohen obviously protested Ja Rule’s claim, saying, “That’s not the most positive—it’s like calling a ship the Titanic.” Seemingly unaware of how analogies operate, Ja Rule doubled down, saying, “If they built the Titanic, and it worked.”

Ja Rule co-founded Fyre, the so-called “immersive music festival,” with Fyre Media CEO Billy McFarland. Scheduled to take place in April and May 2017 in the Bahamas, the festival fell apart spectacularly, leaving hundreds of ticket holders stranded on the island as reports of water, food, and housing shortages went viral on social media. Many of the advertised acts were either never paid, never given specifics, or never contacted to perform. After pleading guilty to wire fraud, McFarland was sentenced to six years in prison. Ja Rule, however, was never caught up in the dragnet.

Hulu and Netflix both produced Fyre documentaries that examined the events leading up to the festival and McFarland’s particular involvement. Ja Rule told Cohen he has never seen the documentaries (“I lived it, Andy!”) and has not talked to McFarland since he went to prison. The rapper further claimed the “biggest misconception” about his involvement in Fyre Festival “is that I committed a crime.”

Cohen retorted, saying, “In one of the documentaries, you called the festival ‘fake advertising’ but not a fraud. Do you believe it was more false advertising and not a fraud?”

Rule replied, “I believe now after everything unraveled, it was a little of both.”