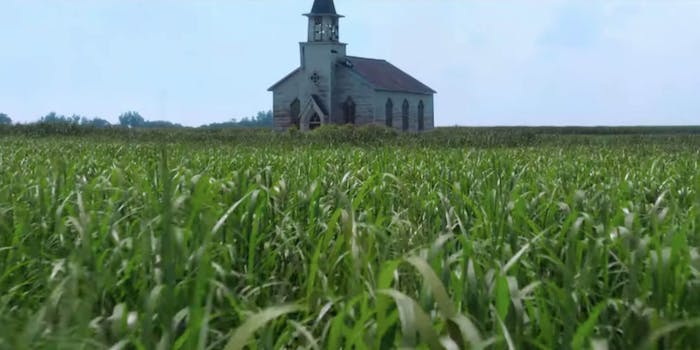 The film tries to join the ranks of beloved Stephen King adaptations—but it wanders just as much as its characters.

In the wake of the box office successes of It and Pet Sematary, Netflix is cashing in on the Stephen King craze with yet another adaptation. Written by King and his son Joe Hill, In the Tall Grass is a twisted tale that works quite well as a 60-page novella. Unfortunately, the full-length feature film wanders just as much as its characters.

In the Tall Grass

RELEASE DATE: 10/4/2019
DIRECTOR: Vincenzo Natali
STREAMING: Netflix
This Stephen King adaptation fails to live up to the scope of its mythology.

In the Tall Grass follows overly affectionate siblings Becky (Laysla De Oliveira) and Cal (Avery Whitted) as they get trapped in a sinister field of towering grass. Lured in by the voice of a lost little boy, they—along with half a dozen others—quickly realize they’re trapped in a mud-splattered, grassy nightmare where time and space only exist as illusions to torture them as much as the audience.

Though the cast of In the Tall Grass numbers six, the field itself is by far the film’s most compelling player. Captured masterfully by director Vincenzo Natali with a truly inspired variety of ominous close-ups, mesmerizing overhead shots, and eerie inserts of natural sound, the grass is actually unsettling. Its malevolent sentience overshadows the screen presence of its human prisoners, despite the actors’ valiant efforts to overcome bland backstories, forced drama, and painfully wooden dialogue. While some horror fans may enjoy the campiness of halting cliches that should’ve been relegated to inner monologues, the script suffers from over-the-top lines and out-of-place, plot-explaining, inter-character conflicts that undercut the grimness the film tries so, so hard to cultivate.

That being said, anguish is the one thing In the Tall Grass does exceedingly well. It’s genuinely sickening to watch the characters endure the same tortures over and over (and over) again. Regrettably, this tedious ‘stuck in a time loop’ structure ensnares viewers in a purgatorial state of suffering as well, and the lack of well-written characters fails to make the distress even remotely rewarding.

The one genuinely engaging aspect of In the Tall Grass is the tale’s unadulterated oddness. The grass’ murky power, the god-like rock at its center, and the fleeting appearances of what can only be described as grass people are delightful in the vagueness of their unstructured existence. They’re each glowing examples of King’s knack for wonky mythologies (see: the turtle god of the It universe), and making such a looming and amorphous mythos come alive onscreen is no easy feat. To his credit, Natali commits to this weirdness without restraint, reveling in all the offbeat supernatural moments without attempting to over-explain spooky field lore that, frankly, is unexplainable. He also dives fully into the garish goriness of the tale that finally makes the film’s pace pick up in the third act, while steering clear—perhaps wisely—of some of the novella’s grittier moments. Lamentably, his evident passion for the project isn’t enough to save it.

All in all, In the Tall Grass is an ambitious, if fruitless, labor of love. Natali clearly took to this project with an enthusiasm matched by his actors and design team, and the Cube and Splice director brings the best of his aesthetic prowess to the table. If you’re looking for an imaginative, albeit empty, Lovecraftian romp to fill your time with, In the Tall Grass is that and nothing more. But if you’d like a meaningful horror experience with real narrative payoff, well…don’t make the same mistake Becky and Cal did. Avoid the tall grass.