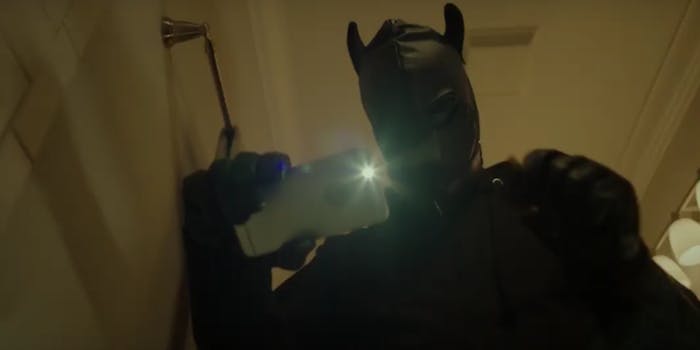 Hulu’s holiday-themed horror anthology Into the Dark closes out 2019 by giving viewers something a little new but mostly familiar with Midnight Kiss. Heretofore the series has predominately featured heterosexual couples. Midnight Kiss gives us a story about a group of gay men going out for their New Year’s Eve tradition. While this is a refreshing change of pace for Into the Dark, it doesn’t necessarily elevate the material. The reason I lead with this is that it’s the most interesting aspect of Midnight Kiss, an otherwise run-of-the-mill slasher film.

Into the Dark: Midnight Kiss

A New Year’s Eve tradition takes on a deadly spin for a group of friends.

It’s New Year’s Eve 2019, and Joel (Scott Evans), Cam (Augustus Prew), Hannah (Ayden Mayeri), Logan  (Lukas Gage), and Ryan (Will Westwater) are all set to bring in their seventh new year together. It’s also their seventh year playing “midnight kiss,” a game wherein anyone in the group is free to hook up with anyone they see fit. The goal of the game is to find someone with whom to share a smooch—but that’s not the real goal.

Unsurprisingly, the game has a tendency to get ugly. If life has taught me anything, it’s that every group of friends has unresolved issues. These issues tend to boil down to two categories. There are the things that everyone knows, but there’s an unspoken agreement to not bring them up. Or there are issues eat away at someone, unbeknownst to the rest of the group. Our capacity for drama is matched only by our capacity for self-sabotage. That has to be what leads us to foolishness like “truth or dare” or “never have I ever.” We trick ourselves into thinking we’re being brave by playing along, taking whatever comes our way. All this veil of competitiveness does is cover up our cowardice, and as adults, we address our issues in the most childish ways possible.

While the group gets ready for this year’s game of midnight kiss, a mysterious player awaits. Someone leather-clad lurks, stalking the group and picking them off one by one. The first hour of Midnight Kiss is kind of a slog. The characters and their problems aren’t dynamic, and the kill scenes are surprisingly devoid of tension. Both things affect the other. If we don’t care about the characters then it’s hard to get too worked up about their possible demise. Fortunately, as the cast whittles down it forces the most charismatic actors, Mayeri and Prew, to the forefront. Once Cameron is the focal point of the story everything that hadn’t been working for me clicked into place.

Last year’s New Year’s entry, New Year New You, is a good point of comparison for Midnight Kiss. Both films are about friends forced to face their conflicts head-on. Credit the performances and the structure of New Year, New You for elevating its premise. Where New Year, New You kept revealing different layers of its characters and story, Midnight Kiss puts most of its cards on the table early on and doesn’t raise the emotional stakes of the story until deep in the third act.

One of the big issues with Midnight Kiss is that it takes too long for the killer to become a true threat to the main characters. The killer manages to keep the friends from realizing the severity of their situation, which ends up hurting the audience more than anyone else. This approach makes the deaths in the first hour feel like filler until it’s time for the real confrontation. But it all goes back to the characters. Most of them are ankle-deep in their development, so we never have a reason to care about them. That’s hard for any film to overcome.

Still not sure what to watch on Hulu? Here are the best movies on Hulu, what’s new, the best shows on Hulu, Hulu documentaries, anime, and the must-see Hulu originals.