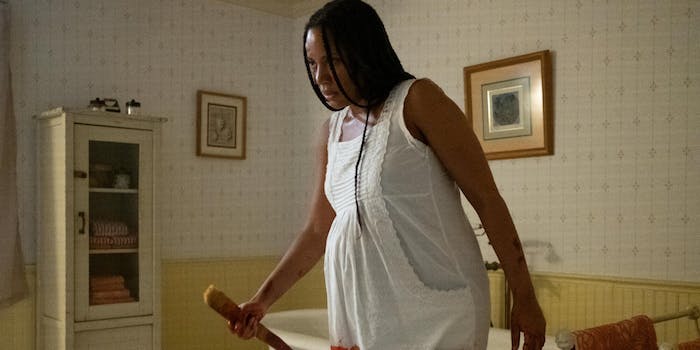 Hulu’s anthology series bottoms out with ‘Into the Dark: Delivered’

The series' Mother's Day installment is a disappointment.

Mother’s Day is the theme for this month’s Into the Dark entry, Delivered. Last year’s film for the holiday found the creepiness in a mother’s love. This year’s episode is unable to do the same. In fact, Delivered is the worst Into the Dark entry to date. It’s plotting is crushingly dull, its twists are predictable to the point of parody, and it’s about as entertaining as changing a diaper. I don’t say this lightly. I can find something in most of the Into the Dark episodes to amuse me. But Delivered has nothing to recommend. Well, maybe one thing, but I’ll get to that later.

Val (Natalie Paul) and Tom’s (Michael Cassidy) are weeks away from the birth of their first child. They’re doing the new parent things like going to prenatal yoga and casually procrastinating on building the crib. It’s that stage of nervous excitement, where you’re doing whatever you can to prepare while trying to act like you know what you’re doing. As most sane parents will tell you, no matter how ready you think you are for parenthood, you have no idea what’s coming. For Val and Tom, there’s no way to anticipate the surprise waiting for them when they meet Jenny (Tina Majorino). Jenny is charming, funny, easy to get along with and she quickly befriends Val and Tom. The friendship between the three develops suspiciously quickly.

Viewers won’t be stunned when Jenny turns out to be a psychopath, but Val and Tom sure are. The action quickly shifts to Jenny’s house, out in the middle of nowhere (obviously), where Jenny drops the friend act and reveals her true plan.  Most of Delivered is a chamber piece, where Tom, Val, and Jenny square off. The machinations of Jenny’s plan and motivations are just that, machine-like. The script, credited to Dirk Blackman, is so transparent that viewers will be a step ahead of the film the whole way. The dialogue is banal and disposable to the point where Delivered would’ve been better off if the characters couldn’t speak at all.

What really holds Delivered back is its complete lack of imagination. Jenny is a creepy character in theory, and Majorino looks like she’s having fun, but her villainy is generic. The script gives Jenny the most straightforward motivation, and she comes across as a low-rent Annie Wilkes. And she’s the most interesting character in the movie. When a horror movie is firing blanks with its villain, that’s hard to come back from.

From a thematic standpoint, Delivered has rich themes to explore. The anxiety of parenthood, the fear that you won’t be able to protect your baby, your past dictating your future, trust issues, etc.— it’s all there for the movie to latch onto, but it only gives its ideas a cursory glance. So the film ends up feeling weightless, which would be fine if it had anything else to hang its hat on. Delivered isn’t fun, clever, thoughtful, interesting, or anything else that makes it worth watching.

I know movies about pregnant women being terrorized is not something people often seek out for fun. But…if you’re an adventurous viewer who isn’t easily offended, there’s a movie that does everything Delivered tries to do, only better: the French film Inside. It’s disturbing, scary, darkly funny, and bloody as hell. Definitely not for the faint of heart, but man, it’s pretty great.

From its opening shot of a shaky-cam chase to its facepalm of an ending, Delivered is dreary dreck. It’s an outright disappointment for Into the Dark, which has had a pretty good second season so far. Luckily, the anthology format means that this can be a bump in the road. Hopefully, Into the Dark gets back on track next month, but we’ll worry about that later. Give yourself the ultimate Mother’s Day gift and skip Delivered.