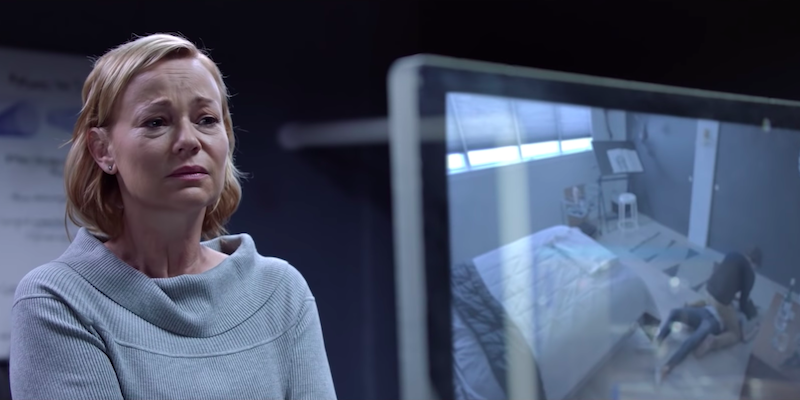 ‘Into the Dark: All That We Destroy’ puts a mother’s love to the test

The film asks how far would you go to 'fix' your deeply troubled child.

With its Mother’s Day entry, All That We Destroy, Hulu’s holiday-themed horror anthology show Into the Dark provoked a reaction other installments have not: It genuinely creeped me out. Heretofore, most of the Into the Dark installments have tilted more toward thriller and suspense, with few, if any, scares. All That We Destroy comes armed with a premise that is downright disturbing, and is easily the most thematically complex and engaging episode yet. It raises a handful of interesting ideas, even if it doesn’t have the time to explore all of them. All That We Destroy pushes the boundaries of nature versus nurture and tests the limits and depths of a mother’s love. If it isn’t successful in all of its dramatic endeavors, well, I appreciate the ambition.

Into the Dark: All That We Destroy

For its Mother’s Day edition, Hulu’s horror anthology ‘Into the Dark’ offers up a story about the extreme lengths one mother goes to in order to save her troubled son.

All That We Destroy starts in a sterile room with a woman named Ashley (Aurora Perrineau). She’s unconscious, either asleep or dead. Someone cleans her, dresses her, and does her makeup, as if preparing her for a funeral. Director Chelsea Stardust shoots this meticulous process with patience, and it feels like we’re showing reverence for the dead. When she wakes up, Spencer (Israel Broussard) is in the room with her. The nature of their relationship isn’t entirely clear. There is a familiarity between the characters that hints at a shared history—are they a couple, a one-night stand, or something else?

At one point, Ashley pauses and a cloud of confusion falls over her. Then Spencer strangles her and bashes her head against the ground until she dies. Are you unsettled?

Ashley wakes up and the process begins again. Spencer’s mother, Victoria (Samantha Mathis), is running some kind of bizarre experiment to help Spencer work out his darker tendencies. All That We Destroy is set in the near-ish future where cloning technology is much more advanced, but human motivations are as conflicted as ever. The film asks which responsibility is greater, your child or your work? Of course, most of our work doesn’t have the life-changing potential of Victoria’s, so it’s an easier choice. But for Victoria, the choice to favor her son results in even greater sacrifice.

In the abstract, it’s easy to say Victoria is making the wrong choice. But she’s living out a parent’s nightmare—and wouldn’t you do everything in your power to “fix” your deeply troubled child if you had the chance?

The script, credited to Jim Agnew and Sean Keller, balances the story between its four main characters. It allows the film’s themes to bubble to the top naturally instead of forcing one or two characters to carry the burden. The futility of Victoria’s mission becomes clear as we spend more time with Spencer. He understands what his mother is doing and, to his credit, he does want to get better. But the more we learn about his past, it’s clear that Spencer is never going to shake his violent tendencies.

The key to the story is Victoria and Spencer’s victim, Ashley. She represents the cost and potential of Victoria’s life’s work. As each new version of herself comes back, Ashley becomes increasingly aware of the hopelessness of her situation. We don’t learn much about her life pre-Spencer, but we don’t need to. The way her life has been co-opted tells us everything we need to know. It’s a tragedy that Ashley not only loses her life to Spencer, but she can’t even escape him in death. Perrineau has the trickiest role in All That We Destroy, and it’s her performance that stands out the most. When Ashley eventually starts to remember her past, Perrineau conveys a dynamic mixture of anger and terror, an unclear memory that portends an unavoidable future.

The story simultaneously opens and constricts when Spencer meets Marissa (Dora Madison), a bubbly neighbor who represents a variable Victoria can’t control. We have a good idea of Marissa’s fate when we first meet her, but for a while, All That We Destroy entertains the possibility of an optimistic outcome. But a mother’s love is all-consuming, and Victoria’s reaction to learning about Marissa snuffs that possibility out. Spencer destroyed a lot of things in his life, and Victoria’s maternal instinct allowed him to continue destroying. If nothing else, All That We Destroy is a damning vision of parenthood. It’s also pretty pessimistic about everything else.

At its best, Into the Dark: All That We Destroy is a knotty story about all-consuming love. The film succeeds when it puts out ideas and lets the audience mull them over. There are some stumbles along the way, such as generic dialogue and clunky exchanges that the actors can’t quite salvage. The film’s sterile, impersonal aesthetic works thematically, even if it keeps the audience at a distance. All That We Destroy is not quite a Mother’s Day gift, but it’s another solid entry for Into the Dark.