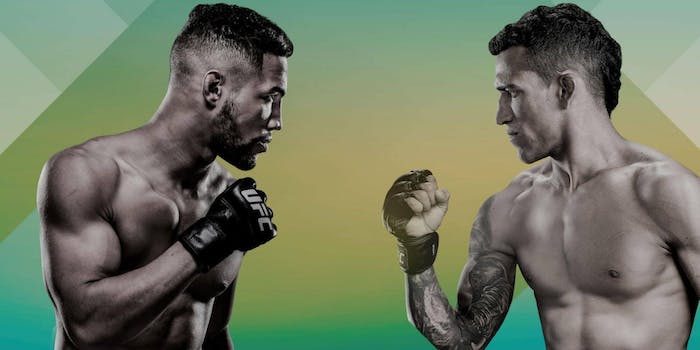 How to stream Kevin Lee vs. Charles Oliveira on UFC Fight Night

One of these fighters needs to take a step forward.

UFC lightweights Kevin Lee and Charles Oliveira occupy a similar kind of in-between space on the MMA spectrum. They have all the skills and potential in the world, but neither has ever made the leap over the line that separates good fighters from great ones. There’s an intangible something, some spirit, beyond talent and hard work and luck that fills the best fighters and transports them. For whatever reason, Lee and Oliveira—who will face each other on UFC Fight Night Brasilia on Saturday night in a bout you can stream on ESPN+—could never summon it.

A former standout college wrestler who dropped out of school after two years to pursue a career in mixed martial arts, Lee (18-5) has been a classic underachiever during his six years in the UFC. He has consistently steamrolled everyone he should beat but has fallen short every time he’s approached the top of the rankings. Had he beaten Tony Ferguson instead of collapsing two rounds into their fight in 2017, it may have been him and not Ferguson fighting for the lightweight belt against champion Khabib Nurmagomedov next month.

Had he kept his emotions in check against Al laquinta in December 2018 he could have won their grudge match and secured himself a spot in the upper echelon of the lightweight division. Then, maybe he wouldn’t have made his emotional, ill-fated move up to the welterweight division last year, a move that lasted exactly one loss to Rafael dos Anjos. To be Kevin Lee is to know the cruelty of limitations.

At the same time, this is the same Kevin Lee who mauled Edson Barboza so badly in April 2018 that a doctor was forced to step in and stop things halfway through the fifth round. And it’s the same Kevin Lee who returned to the lightweight division last November with a beautiful head-kick knockout of Gregor Gillespie that made all the doubters start talking about Lee’s rebirth, his renaissance, his long-awaited fulfillment of all that promise.

We’ll know tonight how meaningful those assessments really are.

Like Lee, Charles “do Bronx’ 0liveira (28-8-1) is a brilliant talent who has always managed to underachieve at just the wrong moments, shrinking under the lights of his biggest fights and halting numerous bursts of forward momentum in the process. But unlike Lee, Oliveira’s recent good fortune has been a sustained affair this time.

Since getting knocked out by Paul Felder in December 2017, the Brazilian has won six straight fights, each by stoppage in either the first or second round. But like Lee, all of those wins came against opponents he was expected to beat. Poor Oliveira has collapsed against the best six times during his UFC career, causing some to wonder about the true extent of his potential. With both men, the question has always been what will happen when they face true adversity.

Both men will have another chance at redemption, but achieving it will mean confronting and conquering a very particular and sinister kind of adversity, something murky and psychological, something inside themselves. Pundits can talk all they want about Lee’s wrestling and Oliveira’s grappling, but the truth is that to move forward on Friday, each man will have to face someone cursed with the exact same affliction they already have.

Here’s everything you need to know to watch Lee vs. Oliveira.

How to watch Benavidez vs. Figueiredo without cable

UFC Fight Night 170 in Brasilia is being broadcast on ESPN+—the streaming service which, as of March 2019, signed a seven-year deal with the MMA organization to be the exclusive home of UFC PPV telecasts and a plethora of UFC Fight Night shows each year.

ESPN+ is a stupendous way to stream all kinds of combat sports content. ESPN+ doesn’t have a free one-month trial anymore, but the service only costs $4.99 per month or $49.99 for the entire year. Given how much content you receive, that’s a really good deal (you can also cancel at any time).