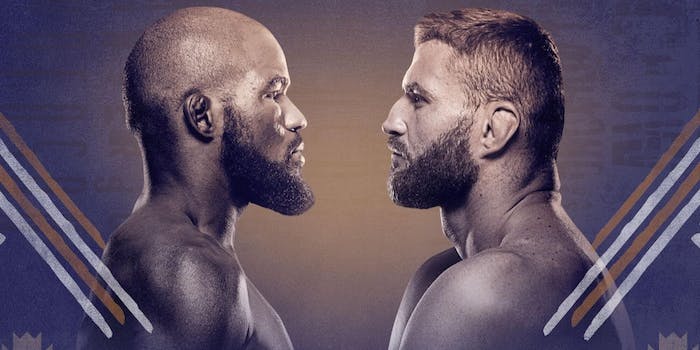 How to stream Corey Anderson vs. Jan Blachowicz on UFC Fight Night

The timing for these two light heavyweights is impeccable.

There was a time not so long ago when earning a title shot in the UFC’s light-heavyweight division was as much a curse as it was a blessing. Back then, fighters like Corey Anderson and Jan Blachowicz would have gone into a top-contender fight, like the one they’re fighting Saturday night on ESPN+, with conflicted hearts: overjoyed at the possibility of having a lifelong goal within reach but dreading the thought that a victory would mean a fight against champion Jon Jones.

Two years ago, taking on Jones had a fatalistic air to it. He had been so dominant for so long that his reign over the division felt like a fact of nature. To take his belt was out of the question. The best a contender could hope for was a spirited effort.

But give Anderson (13-4) and Blachowicz (25-8) credit for timing. By sheer luck, the two men will be going into Saturday’s title-eliminator just as the veneer of indomitability has been stripped from the once-superheroic Jones.

In July 2019, the champion barely got past Thiago Santos in a fight that Santos fought largely on one leg. And last week Dominick Reyes did so well against Jones that a majority of MMA media members scored the fight in his favor. Jones may have won both fights, but some spell was broken in the process, some aura washed away. All of a sudden, the thought of beating the greatest fighter of all time and taking his title didn’t seem like such a fantasy.

Which means Anderson and Blachowicz are peaking at just the right time. For years, Anderson toiled in the middle of the pack at light heavyweight, but his current four-fight win streak, capped off by a shocking knockout of high-flying Brazilian star Johnny Walker in November, has made him a contender in a thin division.

The same goes for Blachowicz, who is on a winning streak of his own but against fighters who were past their primes and coming up from middleweight. In other circumstances—or other, less depleted divisions—Blachowicz wouldn’t be anywhere near a title shot. But success in the fight game is as much about timing as anything else, and Blachowicz is rolling just at the moment a sense of possibility has returned to the light-heavyweight division after nearly a decade of Jones-induced despair.

Two years ago, Blachowicz and Anderson would have been laughed out of any room for thinking they deserved a chance to fight Jon Jones or had a chance to beat him if they did. But time and age and anatomy conspire against all men eventually, even the greatest mixed martial artist ever.

Here’s everything you need to know to stream Anderson vs. Blachowicz at UFC Fight Night 167.

How to watch Corey Anderson vs. Jan Blachowicz without cable

UFC Fight Night 167 in New Mexico is being broadcast on ESPN+—the streaming service which, as of March 2019, signed a seven-year deal with the MMA organization to be the only home of UFC PPV telecasts and nearly two dozen UFC Fight Night shows each year.

ESPN+ is a great way to stream all kinds of combat sports content. ESPN+ doesn’t have a free one-month trial anymore, but the service only costs $4.99 per month or $49.99 for the entire year. Given how much content you receive, that’s a really good deal (you’re also allowed to cancel at any time).