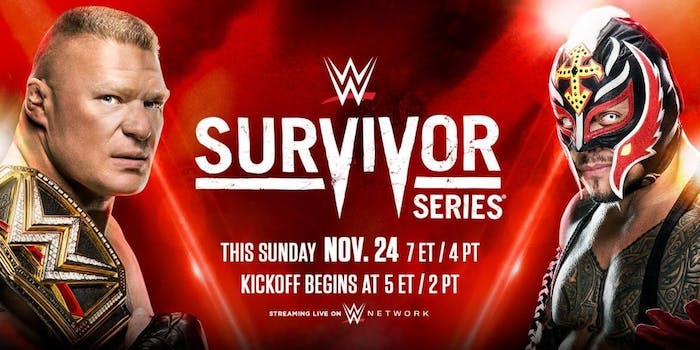 WWE Survivor Series: How to stream and more

If you tune in for anything, do it for The Fiend.

There’s been plenty of indie wrestling to keep fans busy lately, but that doesn’t mean WWE’s offerings should be pushed by the wayside. There are a lot of terrific-looking matches to look forward to during Sunday’s Survivor Series event, including a brawl for the universal championship between Daniel Bryan and “The Fiend” Bray Wyatt; a women’s elimination triple threat match pitting performers from Raw, SmackDown, and NXT against one another; and a juicy-looking triple threat match between AJ Styles, Shinsuke Nakamura, and Roderick Strong.

This concept of bringing in stars from WWE’s other shows was born from what turned out to be a very lucky accident. When WWE stars got stranded in Saudi Arabia after Crown Jewel because of mechanical issues with the airplane, WWE had to hustle to figure out how to replace their spots on SmackDown. NXT members hopped on a plane with little time to spare, creating a whole new (if completely incongruent) storyline twist … and the results were great fun.

But let’s get real: you’re probably watching for Bray Wyatt’s performance because The Fiend is the most creative thing WWE’s done with a storyline in some time. If you aren’t familiar with it, it’s worth catching up with if you plan to tune in Sunday night. Let’s just say that “deliciously twisted” pretty much sums it up–and as much as this fan has hated Daniel Bryan since his heel turn, it’ll be a delight to watch Wyatt terrorize him.

WWE Survivor Series live stream: How to watch without cable

WWE Network is the best way to get the Survivor Series live stream if you want to watch these wrestlers go nuts in the ring. If you’re not already a convert, the news is good: You can get a month of the service free right now, which means you can watch Survivor Series without paying a nickel. After that, the service costs just $9.99 per month, but you can cancel anytime. Considering WWE Network lets you stream all 14 yearly pay-per-view events at no additional cost, that’s an incredible deal. Seriously, just think about how many times you’ve had to pay $60 to watch one PPV. For that same amount, you’ll get a whole year of WWE Network—and access to all past events. Between NXT, RAW, and Smackdown Live you’ll be able to watch all your faves hit the mat on a weekly basis, and you’ll also get access to documentaries, reality programming, and originals.

If you have cable, you can order Survival Series from Spectrum, Cox, Xfinity, Verizon FiOS TV, Cable One, Dish Network and DirecTV for $59.99-$69.99. But given all of the benefits that come with WWE Network—not to mention the chance to get started with one free month—we’d highly recommend figuring out a way to stream the PPV using one of the devices listed above.