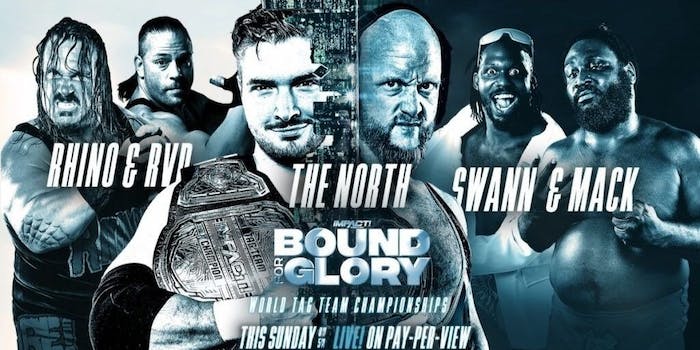 How to stream Impact Wrestling’s Bound For Glory

With the renaissance of weekly independent pro wrestling shows on cable TV these days, it’s easy to overlook Impact Wrestling. You shouldn't.

With the renaissance of weekly independent pro wrestling shows on cable TV these days—with NXT now on USA and AEW now on TNT—it’s easy to overlook Impact Wrestling. But there are plenty of former WWE and ECW stars that now ply their trade on Impact, and on Sunday, you’ll have the chance to live stream the promotion’s PPV on Fite TV.

Brian Cage will face Sami Callahan for the Impact world championship, and longtime wrestling stars Rob Van Dam and Rhino will be in a triple threat tag title match against current champions the North and Rich Swann and Willie Mack.

Rob Van Dam and Rhino were longtime rivals when they both competed in ECW in the 1990s. Eventually, both migrated to WWE for lengthy runs. Now, they’re teaming up to try to find success in Impact.

“I have a really good deal from every standard with Impact and I don’t mind talking about it as it should give them some credibility,” Van Dam told Wrestling Inc. last month. “The reason I’m there is because of the love [Impact] puts in my pocket to be honest … I’m a premium wrestler that not everyone can bring aboard.”

For those who enjoy watching former WWE and MMA star Ken Shamrock stalk his way around the ring, he’s also on the card taking on Moose in singles competition. There’s also an international component. Marifuji from Japan’s Pro Wrestling NOAH will battle Michael Elgin, while the Mexican promotion AAA will lend Dr. Wagner Jr. to Impact to face the Rascalz in a six-man tag-team match.

Here’s everything you need to know to watch Impact Wrestling’s Bound For Glory live stream.

Bound For Glory live stream: How to watch online

The best way to watch these Impact wrestlers compete on Bound For Glory is through Fite TV.

Since it’s a PPV, there’s no legal way to get around the $39.99 fee to watch the card. But Fite TV (you can sign up here) has you covered. Fite TV is available on services like Roku, Apple TV, Amazon Fire Stick, PlayStation 4, Xbox One, Android and iOS devices, desktop and laptop computers, and smart TVs.

Fite TV streams plenty of other wrestling and MMA cards from around the globe, including Bare Knuckle Fighting Championship and Ring of Honor.

For a year-round sports fix, sign up here and click on the “sports” box to receive our weekly boxing newsletter. You’ll hear about all the biggest fights and best knockouts from the Daily Dot’s streaming sports guru Josh Katzowitz.