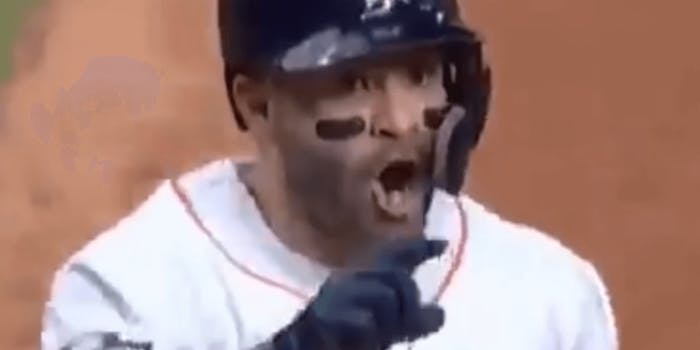 Houston Astros get torched with buzzer memes after new revelation

The Houston Astros are embroiled in scandal, dating back to when Oakland Athletics pitcher Mike Fiers revealed that his former team used a centerfield camera to help steal signs during their 2017 World Series-winning season.

However, there appears to be even more. According to tweets from somebody purporting to be related to former player Carlos Beltran, players allegedly wore buzzers under their uniforms during games to inform them of what pitches were coming during their at-bats.

DEVELOPING: Two Houston Astros players are being accused of wearing buzzers that notified them of certain pitches, but an investigation by the league did not find any evidence to substantiate those claims. pic.twitter.com/XzdjyBFqRa

Major League Baseball confirm the outfield camera fiasco, which led to the firing of manager AJ Hinch and general manager Jeff Luhnow. Alex Cora–who was a bench coach for the Astros at the time and considered the mastermind of the plot–lost his job as the manager of the Boston Red Sox. Meanwhile, Beltran, considered to be Cora’s accomplice, left his managerial position with the New York Mets before he was able to lead the team.

Major League Baseball announced Thursday it “explored wearable devices during the investigation [of the Astros] but found no evidence to substantiate it.”

That didn’t stop people from speculating. A short clip of former American League MVP Jose Altuve went viral, showing him heading to home plate for a celebration after his walk-off homer in Game 6 of the 2019 American League Championship Series. After the game-winner, Altuve appeared to be mouthing that he was wearing something under his jersey and not to rip off his uniform. Altuve immediately beelined for the dugout instead of celebrating on the field with his team. The Astros ended up losing the World Series to the Washington Nationals that year.

Given MLB didn’t confirm the buzzer, it’ll continue to be speculation. So, of course, the memes were out.

THIS JUST IN!
Houston Astros Revealed they tested out their trial buzzers years ago on drunk fans. Here’s the video: pic.twitter.com/dqGsYshi7s

The Houston Astros checking for buzzers under their players’ jerseys pic.twitter.com/H5Fh36Bajg

Gonna tell my kids this is Jose Altuve. pic.twitter.com/1BIevCsSTc

And the best meme goes to: