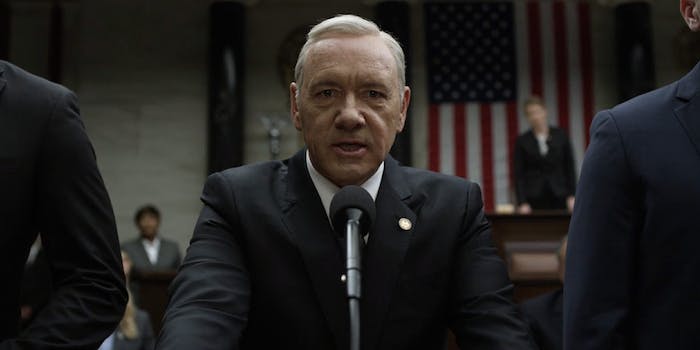 Production on House of Cards season 6 was halted this week, after allegations of assault and harassment surfaced about its star Kevin Spacey. Now current and former employees of the Netflix show are speaking out about what they experienced on set.

According to CNN, eight employees who spoke anonymously claimed that Spacey has a pattern of “predatory” behavior. A former production assistant claims that when he was assigned to pick up Spacey and drive him to set outside of Baltimore, he put his hand down the PA’s pants, and later cornered him in his trailer and tried to force physical contact. “It was a toxic environment for young men who had to interact with him at all in the crew, cast, background actors,” he told CNN.

A former camera assistant who didn’t experience direct harassment from Spacey but witnessed it said his behavior wasn’t always private: “All the crew members commented on his behavior. What gets me is we have to sign sexual harassment paperwork before the start of the show and apparently [Kevin Spacey] doesn’t have to do anything and he gets away scott-free with this behavior.”

A female production assistant said it was “very known that Kevin was inappropriate, and males I worked with complained to me about how they felt uncomfortable.” She detailed instances where Spacey would “play fight” with male crew members “in order to touch them.”

On Monday, a Jezebel post wondered “What Exactly Did Kevin Spacey Do on the Set of House of Cards?” and linked back to a 2015 Gawker article that included anonymous allegations of misconduct on set.

The show’s production company, Media Rights Capital, said in a statement Thursday that it is “deeply troubled” by the new allegations and confirmed an allegation of misconduct during the show’s first year of production in 2012, which was allegedly “resolved”: “Mr. Spacey willingly participated in a training process and since that time MRC has not been made aware of any other complaints involving Mr. Spacey.”