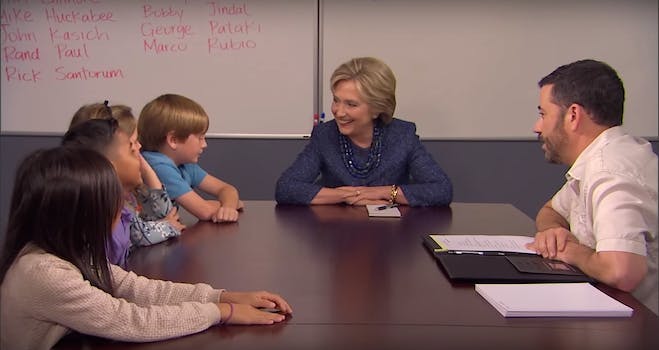 These kids are even harder to impress than a bunch of debate moderators.

The children are our future, so Jimmy Kimmel and Hillary Clinton sat down with a focus group of kids to hear their thoughts on the idea of a woman president.

They might be young (and ineligible to vote in 2016), but some of the discrimination we see in adults is already built into their minds. Some of them believe that women are too weak to be president, or that they’ll paint the White House pink and make it “girly.” But Clinton pointed out that, before we could make such judgments, we should elect one and see what happens.

Working with them might prove to be much easier than dealing with Congress.

Clinton also sat down for a regular chat with Kimmel, where they touched on Jeb Bush’s campaign hiccups, what Bill Clinton would do if he were allowed to run for president again (and who’d win if they ran against each other), and, of course, Donald Trump.