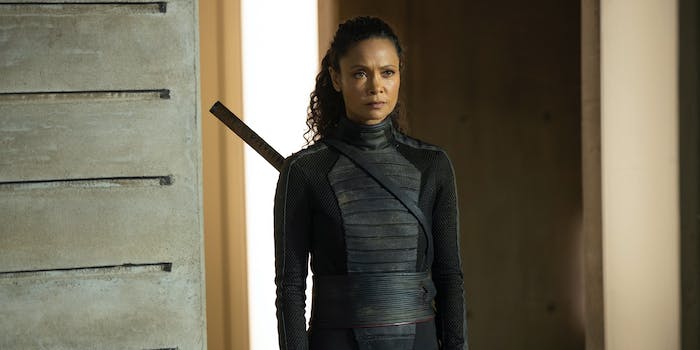 ‘Westworld’ reinvents itself in the season 3 finale

Season 3 wraps up several stories while introducing some new ones.

This post includes spoilers for the latest episode of Westworld, “Crisis Theory.”

When all was said and done, Westworld’s third season went out with a bang, but not without its fair share of confounding decisions, wasted character arcs, and a twist that feels wholly simplistic.

Westworld is certainly ambitious in its aim, and oftentimes, an ambitious show that stumbles is far more interesting to watch than a show that keeps it safe and pulls off its array of hat tricks. Throughout its more streamlined third season, it’s touched on the limits of free will and who has it, the similarities between humans and hosts, and how even when systems are in place to keep everything in line, there are still casualties even if there isn’t absolute carnage in its wake. Sometimes, as Dolores has pushed for much of the season, you need to shake things up a bit.

Eventually, we get to that final confrontation between Serac, Dolores, Maeve, and Caleb that sets humanity on its next loop—one that will almost certainly lead to humanity’s end in the next couple of hundred years. But it takes a good chunk of the episode for everyone to get there with some heavy-handed exposition along the way.

‘I see the beauty in this world‘

Although Dolores and Maeve were both essentially taken out after Dolores pushed the engage button on an electromagnetic pulse machine at the end of “Passed Pawn,” it wasn’t the end for Dolores or Maeve. Maeve was brought back by Serac and given another chance to stop Dolores despite Serac warning Maeve that about already being on her final chance.

Dolores, on the other hand, had some help from Caleb, who removed her pearl and traveled to a riot-fueled Los Angeles with help from Dolores’ virtual assistant. In Los Angeles, there was another host body for Dolores; this time, it’s much more robotic than the previous versions we’ve seen created in a Delos lab. When he places the pearl into her head, Dolores isn’t exactly surprised that Caleb revived her.

Caleb’s taken aback by this as he finally wonders exactly how much of a choice he’s had in any of this. (Was he always meant to lead the revolution?) But for Dolores, she chose him to lead the revolution to free humanity—and therefore give everyone choice—because he once made a choice. She remembers their first meeting several years ago on Delos’ Park 5, which is unnamed but is used by the military to train its soldiers in combat situations; according to the Delos Destinations website, the park is restricted to “defense contracts only.” The soldiers are more than aware that both the targets and civilians in these exercises are hosts, so they’re able to get experience without actively harming other humans while doing so; while the soldiers train on the ground, Delos is getting just as much information on the soldiers.

But when a group of soldiers contemplated taking advantage of the female civilian hosts after a day of training (because, well, that’s what the super-rich do over at the other Delos parks), Caleb dissuades them. That’s the memory that Dolores recalls when she gives him the keys to the revolution all these years later. Even if his programming would indicate otherwise, Caleb has the ability to choose.

“The people who built both our worlds have the assumption that humans don’t have free will,” she says. “Free will does exist, it’s just fucking hard.”

But first, they need to get to Incite, something that’s becoming increasingly impossible between the rioters in Los Angeles and Serac’s forces both blocking them. Dolores gets rid of the former by offering up larger fees on the RI₵O app and a bit of an assist to Caleb from Ash and Giggles. The latter takes brute force, which they manage to put off until they’re separated—and Dolores is forced to face off with Maeve once again.

Maeve’s a character that, as much as she’s beloved, would probably have ended up dead for good if she was literally anybody else. She somehow manages to escape certain death (although not regular host death), and despite her failures, Serac keeps her around; he even helpfully updates her on all of the developments that Dolores and Caleb learned last week about his brother Jean Mi.

Under threat about keeping her from her daughter, Maeve goes out to fight Dolores once again. Dolores reiterates that she doesn’t want to hurt Maeve. It looks to be another fight for the ages, but Dolores is stopped mid-fight by a virtual Charlotte, who at least sees Dolores as her enemy enough to incapacitate her to allow Maeve to take her to Serac. (She also now sees the real Charlotte’s human family as a weakness; her bitterness is now reminiscent of an earlier Dolores.)

Serac still has his sights on the access key to the Delos data Dolores tucked away last season, and he hooks Dolores up to Rehoboam and will go through every single memory of hers and delete them to find it if he has to. Caleb, who’s captured by Serac’s men at Incite, is brought in as well; Serac appears to squash the revolution in its tracks by stomping on the drive provided to him last week by Solomon and belittles Caleb further. Maeve, who figures out that Serac isn’t in control, either—he essentially gave up control of his own life to act as a human counterpart for Rehoboam—asserts that Dolores doesn’t have the access key (and that she gave it to someone else), and Serac orders both Caleb and Dolores to be killed.

But for a moment, Maeve and Dolores connect on another plane in their minds where Dolores urges Maeve, who’s been more or less catering to Serac’s will all season, to finally choose a side of this war. Sure, her plan might end humanity (as Caleb discovers), but humans will finally get the option to choose what happens to them.

The Dolores we know is gone, but Maeve has finally emerged. Serac tries to stop her, but she burns his control remote out of his hand. Despite his attempt to stop the revolution, it happens anyway: By sifting through Dolores’ mind, Serac gave control of Rehoboam to Caleb, who orders the AI to delete itself. Maeve and Caleb leave a bleeding Serac and Dolores behind to watch the fireworks go off in Los Angeles in a shot that visually calls back to the end of Fight Club.

The most important host on Westworld

Bernard and Stubbs have had little to do for most of season 3 aside from trying and failing to keep up with Dolores, briefly teaming up with William, and delivering a lot of exposition. He does play a similar role in the season finale, but it also comes with a bit of closure for the man known as Arnold.

William’s upper hand on Bernard and Stubbs doesn’t last long; all it takes is Bernard unleashing a different side of himself loose to escape, albeit not without Stubbs getting a gnarly gunshot wound; William runs off and returns to society and tells a colleague who thought he was dead that he planned to “save the fucking world.” When the San Francisco Police Department shows up in riot gear, it looks as though Bernard has to fight even more cops, but he’s got an unlikely ally on his side. It’s Lawrence (Clifton Collins Jr.), the Westworld host who was sometimes known as El Lazo and aided both Dolores and William during his many loops there, the host carrying the final Dolores pearl. He stays long enough to give Bernard a briefcase and to tell him to see “her.”

The “her” in question ends up being Arnold’s ex-wife Lauren (Gina Torres), who’s much older than the last time we saw her and with a much more addled memory, so she doesn’t question the fact that the man who looks like her husband hasn’t aged a bit. It’s a moment that gives Bernard depths of humanity (and gives Jeffrey Wright something interesting to do), but it also allows him some closure on the death of Arnold’s son Charlie, something that was added to Bernard’s backstory.

Later, at a motel room, Bernard puts Stubbs on ice, and Bernard hooks himself up to a machine that will allow him to enter the Sublime (or the Valley Beyond); Dolores didn’t trust herself, so she put the access key into Bernard’s head. In a post-credits scene, Bernard returns to our reality, but he’s covered in dust, hinting at the decades or even centuries that he spent in the Sublime.

Westworld’s post-credits scenes, which can sometimes go long enough that they feel more like continuations of the episode rather than a quick tease, often turn things on their head completely. Last season, we learned that William’s consciousness was eventually placed into a host and tested for fidelity. Now, we’re meeting a new version of the Man in Black.

William, hellbent on destroying all hosts himself, heads to a Delos lab with that aim in mind. He shoots an employee before heading down to the basement, where Delos’ printing machines are hard at work. He encounters Charlotte, who kept some of the damage done to her body to remind her what humans are capable of. She asserts that she’s going to stop Dolores and that William is going to help her. But not just any William: It’s a host version of William, one who’s at least a good imitation of the man. After a brief fight, Host William slits the throat of the Human William, who’s left to bleed out as we see Charlotte building a new army of hosts.

In the end, Dolores’ plan came into fruition: Hosts won’t die out after all. But it’s a twisted victory not just because the Dolores we know isn’t there to witness it, but because Charlotte has now diverged enough from her creator to become more than willing to bring her own brand of havoc on the rest of the world.