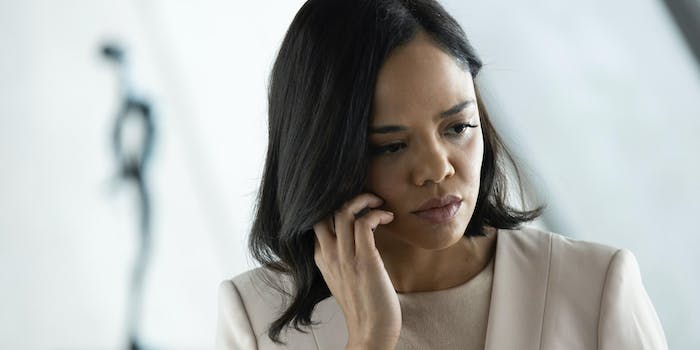 ‘Westworld’ turns the tables on its hosts

Serac takes back control while William gets a new perspective.

This post includes spoilers for the latest episode of Westworld, “Decoherence.”

Westworld has spent much of its run casually switching between different timelines and different realities with ease (and sometimes with bouts of confusion). Is it now, or 30 years ago? season 1 asked. Season 2 focused on the aftermath of Dolores’ revolt on Westworld, something that played into the eventual reveal that Dolores was masquerading as Charlotte for half the season. Parts of season 3—particularly for Maeve—were spent in a simulation. And as we return to that simulation in “Decoherence,” Westworld manages to turn reality on its head.

After Caleb’s “Genre” cinematic drug trip did little more than play with the color and sound of the screen last week, “Decoherence” really pushes the limits of its own storytelling in fascinating ways—but more importantly, it loops Maeve back into the story. Much of “Decoherence” is spent either in Maeve’s simulation (as evident by the different aspect ratio whenever we cut to her) or in the midst of William’s AR Therapy, a kind of treatment that he undergoes while at his treatment facility.

But the real world isn’t much better: We see the aftermath of Dolores leaking all of Incite’s profiles to their users from William’s confusion while Charlotte has to contend with a new owner in town.

Another round in the simulation

Maeve, consistently one of the highlights of Westworld, was noticeably absent throughout the entirety of “Genre,” creating a sort of paradoxical issue within Westworld. During this season, many of the episodes where she’s barely a factor seem to pale in comparison, but when you do see her, it’s evident just how separate she is from the rest of Westworld’s overarching story.

Despite a brief reprieve in “The Mother of Exiles,” Maeve is sent back to the simulation after being shot by Musashi. Although helping kill Dolores isn’t much of a choice for Maeve, she has a demand of her own. Dolores has others to help her, and she wants the same, which Serac agrees to.

“I can give you what you want,” he tells her. “But remember, Maeve, if you fail again, your future won’t be in such calming surroundings.”

For the time being, Maeve returns to the War World narrative, where she casually takes out a bunch of Nazis (with a shrug, as you do) before joining Lee Sizemore, who’s programmed the other hosts to ignore his presence, at the bar. “What, was I supposed to go back to work after realizing I don’t actually exist?” he asks her when she gives him a look.

Maeve still has the ability to manipulate other hosts, access the simulation code, and look beyond the simulation, so she can see that her pearl is located in the lab where her body is being printed out. She soon discovers that Serac fulfilled his promise of reinforcements by securing Hector from Westworld and is in the midst of printing out his body as well; with a bit of tinkering, she’s able to wake him up. Realizing that Serac has several pearls in the lab alongside hers—including the one belonging to the Dolores copy in a host version of Connells—she returns to the basement where Arnold once tested Dolores (and Dolores tested Bernard). She has Dolores’ memories up to a point, but their paths have diverged. But what she does, aside from giving Maeve an idea of what her copies might do, is give her something to chew on.

They’re both among the most powerful hosts: Maeve can control other hosts while Dolores’ power resides within the human world. They’re both gatekeepers, but their methods differ; Dolores also resents Maeve because she aligned herself with Serac.

“You want me to be a saint, but you’re no saint,” Dolores tells her. “You’re not a villain either, and neither am I. We’re survivors.”

They’re also at an impasse. Neither of them can promise the other anything to fully gain their trust. But by knowing herself, Dolores predicts that Charlotte will chip away at her allies just before Charlotte crushes Hector’s pearl (which kills him for good) and takes Connells’ pearl with her. She’s distraught, but by episode’s end, she also finally has her body back.

It’s safe to say that William doesn’t exactly want to be in the mental institution that he’s found himself in. He was tricked by Charlotte, who exploited William’s vulnerabilities, hallucinations, and volatile nature in the aftermath of his daughter Emily’s death. He lashes out in group therapy, telling fellow patients that God doesn’t exist as he compares them to maggots eating the corpse of the earth; even now, he’s going for the poetic imagery.

He’s not doing much better with an individual therapy session. His therapist Natasha offers to put him AR Therapy, which she says is used on veterans with PTSD (something that sounds similar to what we know about Caleb’s official story). During the session, William’s therapist receives access to her Incite profile.

Without access to any kind of smart technology, William’s largely left in the dark as the chaos ensues. He gets a drip similar to the one that Caleb has installed onto the roof of his mouth and the technicians take a blood sample, which picks up an unknown protein in his bloodstream that alerts a recipient server in Sonora, Mexico—likely what Charlotte injected into him a couple of episodes ago before her men took him away. In a drugged-hazed, he’s shepherded to his AR Therapy session; on the way, he sees Natasha take her own life, but the guards barely seem to register it—if they noticed at all. Once he’s strapped in, William is left to his own devices.

And well, it gets weird in a very welcome sort of way. Because, for the most part, William is convening therapy with himself.

At first, William is transported into the bedroom he had as a kid, observing his younger self read a tale of kings and queens and knights, but when his father comes yelling for him, the older William starts to panic and demands to be taken out of the session. After attacking the techs, he’s drugged again.

Sometime later, he’s prompted to go to a group therapy session, but a few things feel off about it. For one, Craddock (Jonathan Tucker), who was one of the hosts that William tortured and destroyed during his Westworld trip last season, is taking him to that session. Also gone is the glove William has taken to wearing to obscure the fingers that were shot off last season; his hand has returned to normal. And when he gets there, he’s surrounded by Williams. We have the kid version of William, but we also see a young adult William (Jimmi Simpson) as well as two other versions of older William: the suave businessman and philanthropist and the Man in Black (both played by Ed Harris). The person presiding over this session is none other than Jim Delos (Peter Mullan).

It’s a self-psychoanalysis taken to another level. Here, Westworld plays around with the kinds of ideas it’s been toying with all season. How much free will does a person have in a world where everything is determined for you? Do outside factors have a play? Or, to put it more plainly, it’s the nature versus nurture debate: Was William born a monster, or did he become one over time? “If you can’t tell, does it matter?” the older William asks.

Each iteration of William argues their innocence in all of it, but as it becomes clear, there’s always been a darkness in William; the youngest version is about to get his ear chewed off by his dad because he broke a classmate’s arm and knocked out three of that kid’s teeth. But no matter how dark each iteration might be, they’re no match for the William we’ve been following all along: He beats up all of them, leaving Simpson’s William for last, and tells Jim Delos that he’s free and that he’s the good guy.

But is he? Before he can process that any further, William’s view changes. He’s back in the AR Therapy chair, the glasses having just been taken off. Bernard and Stubbs found him in the facility and determine that he’s been there for a while, although it’s unclear to them if William was left there on purpose or if he was forgotten amid all of the chaos.

For much of season 3, Charlotte’s been dealing with a unique identity crisis: Is she still Dolores (a.k.a. the pearl inside of her head), or is she merging with the real Charlotte? She’s both and neither, and the longer she stays as Charlotte, the more confused it gets; at one point, the Dolores in charge of everything has to remind her that Jake and Nathan aren’t actually her family.

Because, family or not, Charlotte sees that Jake and Nathan—the former who refused to look at his Incite profile—are in real danger. Her fellow board member who was set to vote with her to make Delos private is murdered by Serac’s men; Serac found a silver lining in the Incite leak in that the board member’s murder will be grouped with the chaos caused by the leak—plus, he now has the ability to purchase Delos for himself. (It also helps that the black circle showing Rehoboam’s activity is starting to return to normal.)

And right away, his plan for Delos comes with two initial objectives. First, he orders Delos to destroy all of the intellectual property used to create hosts. And second, he orders every employee to be tested so he can locate the mole within Delos; after getting fooled by Connells last week, he presumes that Dolores has someone at Delos as well.

On Dolores’ orders, Charlotte copies Delos’ host data, but as lucky as she’s been all season, you can tell that her luck is starting to run out. One of Serac’s men doesn’t believe her lie about making a backup file just in case, so she has to kill him. She even calls Jake to tell him that he should stay inside, which turns out to be her Achilles’ heel: The real Charlotte Hale, Serac tells her, would’ve never reached out to Jake and Nathan. But Charlotte is prepared with a gun and a canister of gas that takes out the entire board with the exception of Serac, who once again holo’d into a meeting he could avoid attending in-person.

And in the end, it’s a tether she can’t shake off until it’s too late. She might have been able to get past Delos’ and Serac’s guards (with an assist from a riot control robot), crush Hector’s pearl, rescue the Dolores pearl in Delos’ position, and reach Jake and Nathan again, but she couldn’t protect them forever. One minute, she’s assuring Jake that she’ll keep them safe. The next, their car explodes, killing Jake and Nathan instantly while a burned and vastly damaged Charlotte crawls out of the car. And while Dolores and most of the hosts have wanted to take out Serac for ages because he wants to get rid of the hosts, he just made it personal.