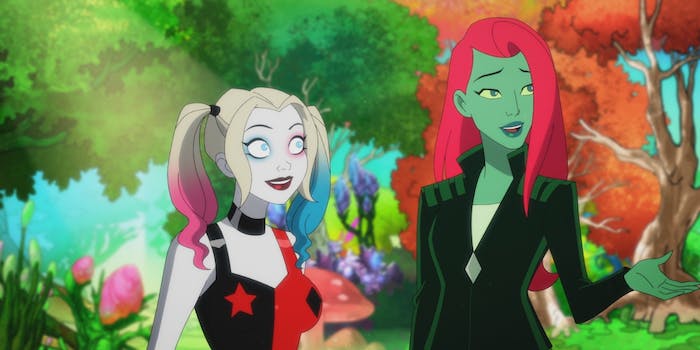 Harley Quinn’s full embrace of “Harlivy” is like a breath of fresh air.

It was all fun and games on Harley Quinn until the creative team tried to get Batman to go down on Catwoman.

The plotline, which became something of an amusing controversy that also highlighted TV’s double standards about sex, was nixed by DC Comics because “heroes don’t do that” and having Batman (Diedrich Bader) performing oral sex on Catwoman (Sanaa Lathan) in the adult animated series would be bad for selling toys; naturally, jokes followed.

The solution, which appeared early in the third episode of Harley Quinn’s third season, was to make it look like Batman had a foot fetish while massaging Catwoman’s feet. (The punchline, presumably, was the same: Batman was bad at it.)

It’s the kind of irreverent, raunchy, laugh-out-loud silliness that is essential to Harley Quinn, which for me is consistently one of the funniest shows on TV.

The series follows the titular DC fan favorite (Kaley Cuoco) trying to start her own Gotham gang of villains including the likes of Clayface (Alan Tudyk) and King Shark (Ron Funches) after she dumps the Joker (also Tudyk). There are jokes and gags everywhere you look—as a Jersey native, the Bruce Springsteen throwaway nod in season 1 had me dying—but at the center emerges a growing romance between Harley and Poison Ivy (Lake Bell), which is confirmed at the end of season 2 as the characters drive off into the sunset.

And in season 3, the show’s first on HBO Max, there are no signs of that romance slowing down even as Harley and Ivy navigate how to function as a couple. (“​​Harley and Ivy will never break up in the series as long as we have a say,” Harley Quinn co-showrunner Patrick Schumacker recently told the AV Club.)

It’s far from the only plotline that Harley Quinn explores, which also introduces a dickish Nightwing (Harvey Guillén) and a subplot around Clayface getting hired to work on a Thomas Wayne biopic directed by James Gunn (and voiced by Gunn himself). But the romance is front and center, driving the characters and the plot side-by-side.

So many superhero properties are overly self-serious (SnyderCut) or seem like they’re allergic to any kind of genuine emotion (Thor: Love and Thunder).

There’s great biting satire in The Boys and heartfelt emotions with Ms. Marvel. James Gunn’s DC properties (The Suicide Squad, Peacemaker) are all in the ballpark, but Harley Quinn never tries to be about something bigger than itself; it just is.

And when most superhero properties are still so afraid of showing any kind of complex queer romance—and even surface-level representation is hard to find—Harley Quinn’s full embrace of “Harlivy” is like a breath of fresh air.