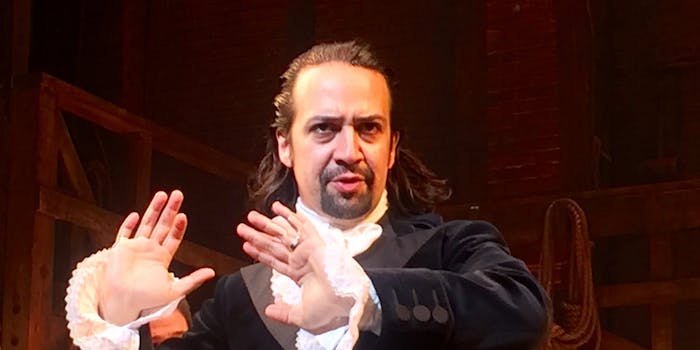 ‘Hamilton’ is coming to Disney+ way ahead of schedule

The hit Broadway musical will finally be available online.

Smash-hit musical Hamilton is coming to Disney+ more than a year earlier than originally planned.

Disney sealed a $75 million deal with Hamilton creator Lin-Manuel Miranda in February, building on his previous Disney collaborations like Mary Poppins Returns and Moana. The plan was to give Hamilton a worldwide theatrical release in fall 2021, followed by exclusive streaming rights for Disney+. It’s a welcome but very unexpected surprise to see Disney abandon that plan and move ahead with a Disney+ release on July 3, 2020––15 months ahead of schedule.

The Disney+ version of Hamilton isn’t a movie adaption. It’s a stage performance starring the original Broadway cast. Filmed over three nights in order to get the best material possible, it has the same runtime as the live show.

Hamilton is the biggest Broadway hit of a generation, and its lack of accessibility has been a hot-button topic. You can listen to the original cast recording for free online, but live performances––even for later productions in other cities––are still prohibitively expensive for most audiences, unless you’re lucky enough to win a ticket lottery.

It’s unusual for a popular Broadway show to get this kind of widespread home release because producers are concerned that it might reduce the value of in-person performances.

This Disney+ announcement comes five years after the show’s debut, and four years after it won a Pulitzer prize, with Broadway tickets still selling for hundreds of dollars.