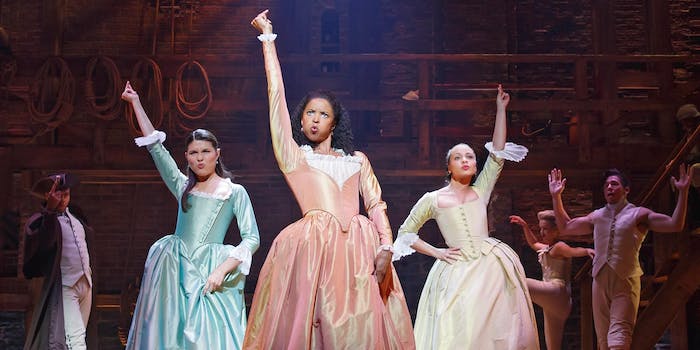 Disney is releasing a ‘Hamilton’ film with the original Broadway cast

We’re willing to wait for it.

More than four years after its Broadway debut, Hamilton—which won 11 Tonys, seven Oliviers, a Grammy, and the Pulitzer Prize—is finally coming to movie theaters, and we know just how long we’ll have to wait for it.

Walt Disney Studios announced Monday that a theatrical version of Hamilton starring the original Broadway cast will hit theaters Oct. 15, 2021. In a press release from Disney, the film is described as “a leap forward in the art of ‘live capture’” as it combines stage and film experiences and will be “a cinematic stage performance that is a wholly new way to experience Hamilton.”

Disney presents:
Hamilton.
With The Original Broadway Cast.
Filmed onstage at The Richard Rodgers Theatre.
In A Theater Near You.
October 15, 2021.#Hamilfilm pic.twitter.com/z4ohfWXzi3

“Lin-Manuel Miranda created an unforgettable theater experience and a true cultural phenomenon, and it was for good reason that Hamilton was hailed as an astonishing work of art. All who saw it with the original cast will never forget that singular experience,” Disney CEO and chairman Bob Iger said in a statement. “And we’re thrilled to have the opportunity to share this same Broadway experience with millions of people around the world.”

Fans have known for years that a filmed version Hamilton starring the original cast before they started to leave the show exists as a way to one day make it more accessible to people who were unable to see it performed live; Miranda confirmed as much in 2016, and a bidding war for the theatrical rights to Hamilton emerged in 2018. In Disney’s press release, Kail confirms that the musical was filmed at the Richard Rogers Theatre in June 2016, noting that “we wanted to give everyone the same seat, which is what this film can provide.”

Miranda even mentioned the Hamilton film a few days ago during the Sundance Film Festival, noting that Hamilton would be turned into a movie “sooner rather than later.”

Even before Disney announced Hamilton’s release, Miranda already had a working relationship with Disney. He starred in Mary Poppins Returns, wrote original music for Moana, and he is writing new songs for Disney’s live-action remake of The Little Mermaid.

“I fell in love with musical storytelling growing up with the legendary Howard Ashman-Alan Menken Disney collaborations—The Little Mermaid, Beauty and the Beast, Aladdin,” Miranda said in a statement. “I’m so proud of what Tommy Kail has been able to capture in this filmed version of Hamilton—a live theatrical experience that feels just as immediate in your local movie theater. We’re excited to partner with Disney to bring the original Broadway company of Hamilton to the largest audience possible.”