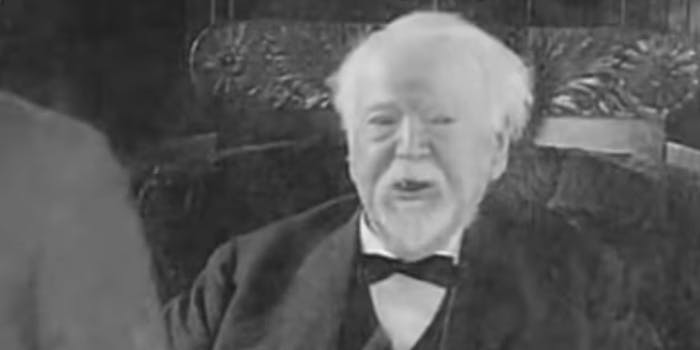 This old-timer is wise.

While YouTube is a haven for vlogger drama and maybe-not-so-real engagements, marriages, and pregnancies, there are plenty of smaller channels putting out niche content that give us a window into the way the world used to be. Before smartphones and the internet and… electricity.

Take for example this video from the Guy Jones YouTube channel that was uploaded on Sunday. An 89-year-old man named John Emory Andrus was interviewed in 1930 about the state of culture and about how much life had changed since he was born, circa 1841.

Some enterprising soul thought to set up a camera to record him—according to the YouTuber, it was shot with an early Movietone sound camera—and now Jones has uploaded a nearly six-minute video of the interview.

Andrus served in the U.S. Congress as a representative from New York in the early 20th century, and in the interview below, he talks about the wonder of modern technology. Most notably, electricity—and, um, steam power.

“The world has made great progress with electricity and steam power that was unknown when I was a boy,” Andrus said. “We are yet in the infancy of the developments and the benefits that are coming from electricity.”

Andrus also had some good advice on how a man (and presumably a woman) can make good use of technology.

“New things are arriving every day,” he said. “A man that has sense and can see them and choose that which is more congenial to his makeup, he’s sure to make a success if he’s positioned untiring in the matter.”

Interestingly, the interviewer asked Andrus how much longer he thought he’d live. “I expect to live as long as my heart is true to form …” he said. “I’m going to do my part in taking care of my physique.”

(Andrus would live another four years after this interview was recorded.)

Andrus also talked about the recent stock market crash, about how many letters he has to write when he goes into his work office, and the advent of “flying machines.”

Jones has plenty more of this type of his content on his channel (171,000 subscribers), mostly scenes from the late 19th and early 20th century. Click below for the entire video of Andrus.